Posted on September 1, 2014 by staffordshirebred

My parents finished building the house at 155 Bosty Lane, Aldridge by the summer of 1957. They had, by this time, been married for almost nine years.  These had been nine years of a childless, double-income life in rented rooms comprising half of a nice house on Broadway in Walsall.  These had been nine years of delightfully carefree week-ends in the country: cycling trips, picnics, or fishing expeditions. They had enjoyed a little money in their pockets and no domestic responsibilities.

Now a mortgage had been taken out by the new property-owners in order to purchase the plot of land and the materials for their home (a risibly small sum by 21st century standards), and they decided to begin this new phase of their life with a celebratory fortnight’s holiday in Berrynarbor, North Devon.

“English Setter Puppies For Sale,” read the chalked sign outside the Poltimore Arms at Yarde Down on Exmoor, as they passed the old pub in their V8 Pilot, and suddenly, unaccountably,  they felt more than ready to down a thirst quenching tankard of Shandy.

How could they refuse the landlord’s daughter’s invitation only to peek into the outbuildings out at the back, and admire the litter of pups squirming in the straw, just about ready to leave their beautiful mother, Lucinda for lives in their new homes?

Inevitably, when they returned to Aldridge, the patter of four furry feet now sounded on the newly laid red quarry tiles in the little kitchen on Bosty Lane, and a soft, silky muzzle nudged Mom’s hand as she finished painting the window frames, (black and white) and stitched up the bark-cloth cushion covers. Dear Simon became my dad’s shooting companion, and as gentle and obedient as you could wish a dog to be – apart from the afternoon he leapt on an unsuspecting lady visitor, whose “visiting hat” was adorned with a cockade of pheasant feathers.

This house was furnished with marvellous things, from the perspective of my grandparents on both sides of the family.  There was hot and cold running water from the taps, and to store food in, a refrigerator. ( the 1950’s Frigidaire was still in service there when I got married in 1992: ” My word, it’s like the bonnet of a Buick!”  said my husband when for the first time he saw the convexly curvaceous  fridge door, with its slender, vertical, chromed handle).

Luxury of luxuries, there was a television, sitting on its spindly “atomic age” legs in the living room. And, considered a necessity because of my Dad’s building business, a telephone was soon installed.

Even twelve years after VE day, post war shortages were blamed for the practice of installing a “Party Line” connection  – to the ponderously heavy, black Bakelite telephone receiver  supplied to my parents.  My parents at 155 shared the line with the Aldridge family at number 143 – perhaps the only other household in Bosty Lane to have a ‘phone in the 50’s.  Mr Aldridge of Aldridge, worked as a manager for Rock and Downes builders on the Walsall Road.  Clearly, the dangers of not being able to receive out of hours cement or scaffolding queries were taken very seriously by the General Post Office at the time.

At 3.30 a.m. on the morning of Friday September 8th, 1961, my father woke to hear that telephone emitting its characteristic, rhythmic, shrill, mechanical ring.  Some momentous, and long anticipated news was bursting to come through.  From Bloxwich Maternity home, a midwife was calling him with news of my birth.

“Husbands only,” we read, “may visit every evening 7-45 to 8-30 p.m., without a visiting card.” – which perhaps accounts for the perfect state of preservation of the visiting cards in my possession.

We were soon released from the six-bedded maternity ward at Bloxwich that had once been one of the generously proportioned bedrooms of a wealthy Victoria family’s Italian style villa.  The building is still discernible behind a high hedge, and is part of the present day Bloxwich Hospital. 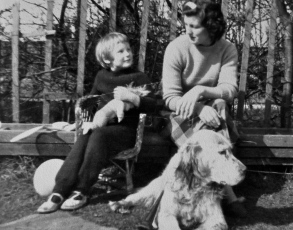 Mother and I spent the following – then requisite – several days of complete rest both happily be-pillowed between the dark polished oak headboard and footboard of my parents’ bed at Bosty Lane.  Aunty Rene kindly double-bussed it from Stonnall to make light of the housework, and a community midwife attended to us.  Mrs Gombridge was that right-thinking professional who seems to have esteemed dogs at least as highly as she did babies.  Two large mongrels accompanied her on her rounds, panting and wagging their tails in her little car as she made her calls on new mothers, and her dark uniform was liberally coated with their hair. She put paid to any misgivings my mother had about big dogs and new babies and briskly insisted that Simon should be introduced to his new human immediately. His kind brown eyes watched protectively over me for the next several years.  With angelic patience, he suffered my little arms to probe deep into his soft liver-and-pink mouth to retrieve an important piece of Lego that he might have purloined from my play. 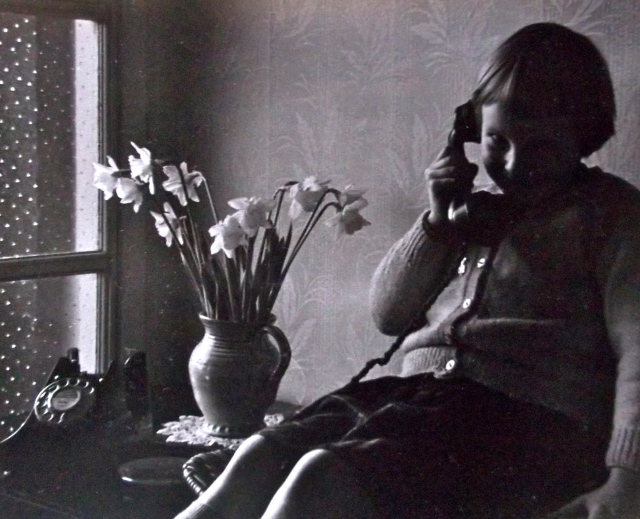