Posted on October 14, 2014 by staffordshirebred 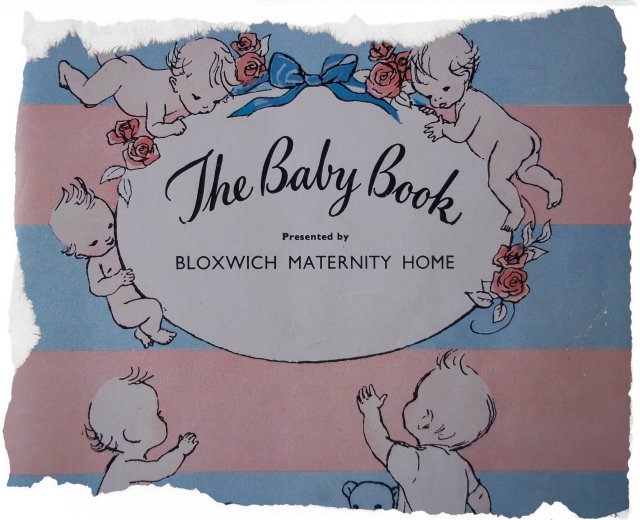 Received, sincere and helpful advice during her “confinement”, by my mother in 1961. That she has preserved it thus some indication that the time holds happy memories for her?

This funny baby did not appear as pink and cherubic as the illustrations on the cover of the instruction manual that it came with. But a few hours had now passed since my birth. The angry bruising around my face had begun to subside, along with the memories of any previous lifetimes.  The nurses at Bloxwich Maternity Home deemed I was finally fit to be presented to the other end of my mother. 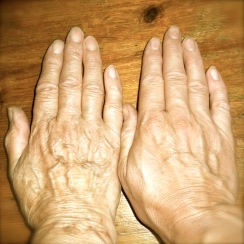 A matching pair of right hands – but separated in age by 31 years, 9 months and 24 days.

“Oh, she looks just like her father, the poor little thing!” it is claimed that she expostulated, when presented with what she had to make do with forever –  her only offspring.

Then she noticed the miracle of my little hand, the index and the ring finger curved inwards, and the little finger discernibly bent at the top joint: an exact miniature replica of her own.

My hand, my good fortune.  From this alliance  you could prognosticate a happy carry-on without reference to the auspicious, graphically pleasing,  upsidy- downy year in which I arrived – 1961 – or to the  lines on my palm.  Any fool could see this was the best of starts in life that, having fallen to Earth, it was this particular woman who grasped my matching mitt – and held it tightly through my infant vulnerability, only to lovingly unfurl her fingers and let go when I was ready to stand steadily. Now I take her hand and steady her through our precious remaining years – we are going to move in together.

Her sisters –  my aunties –  don’t share our twisted digits.  Kathleen’s long fingers and smooth spoon-shaped nails are nothing like ours.  Irene’s  – once daintily manicured and ladylike  when she was a glamorous young manageress at Dorothy Perkins – have been coarsened by a subsequent half a century as a hands-on farmer’s wife.

This image is a refugee from an eBay sale.

The fingers on their own mother’s left hand were a troubling sight to me as a child: my Granny Sheldon’s left hand was crippled, and with the nails horribly deformed into tiny cubes of dark horn.

They must have been nimble enough, once. As an industrious young teenager  – in 1911 – 14 year old Elsie May Day, of Paddock Lane, Walsall, was a “sorter in a brass foundry”.  Between then and her marriage and the birth of her first child in 1927, she had a period of employment at the Grove Laundry in Walsall that proved costly to her wellbeing.

In those days, gentlemen’s shirts sported detachable collars that could be laundered separately and stiffened with starch. Between its two fearsomely large rollers, a special machine at the busy Grove Steam Laundry was, several times daily, fed with industrial quantities of starched collars. One dark morning my grandmother inadvertently added her fingers to the load.

The pain must have been excruciating.  The incident was never described in detail to the family in later years……..only “it was thought that I would lose my hand.”

Barr Beacon, late 20’s. My grandmother, Elsie May Sheldon, nee Day, and beloved first-born, my “aunt” Winifred, who wouldn’t, thanks to meningitis, make 16.

Here, see the state of the sorry left hand.  Sometimes, my mother remembers, the wearing of the wedding ring was sacrificial,  gave some gyp.

This is a celebration, a rare day out. They had travelled from Walsall to Barr Beacon, remarkable simply for being an elevated vantage point in an area of scarce and modest eminences. It had been opened in 1918 with pomp as a public park following the death of the last of the Scott family, after some centuries as the crowning glory of their estate,  centred around Great Barr Hall.

It was 10 years since Elsie’s husband had, unforgettably, seen his pals shot to bits before his eyes on the Somme, and at Passchendaele. Later, at the very summit of the Beacon, would stand a memorial to the Midland’s fallen. She sits with little Winifred, the beloved  first baby, born 1927, and died from meningitis in the midst of the Second World War.

Me, Granny Sheldon, and the much abused dolly “Sarah” . 11, Friezland Road, Bentley, Walsall, c. 1967. The sideboard contains a cache of humbugs, in a jar, only for “good girls.”

We got on famously.  I was the only grand-daughter. (Irene bred boys).

Just once, we took her with us for our annual holiday at my father’s sister’s farm in North Wales.  We shared a room.   Her corsets were a fascinating clatter of stays in salmon pink fabric, draped over the chair at the end of our bed. I remember the reluctance with which she returned from the sea air to her house in Walsall.  “This hole,” she said, venomously – such an uncharacteristically frank admission that life was an ordeal – and it cut me to the quick, because as much as I loved holidays, I loved my home.