Piping down the valleys wild.

Posted on June 14, 2014 by staffordshirebred 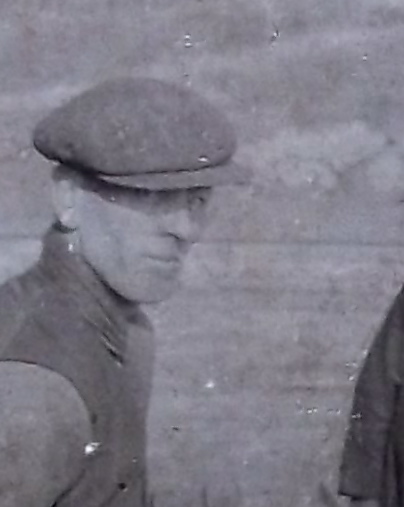 He is out of bed well before the five children rise and put their reluctant toes onto the cold lino before dressing for school. His faithful little wife – in her morning pinafore – the wrap around variety –  fries bacon for his breakfast sandwich. It sizzles in a pan on the gas hob, or, sometimes, on the living room fire, livened from its night-time blanket of slack, if they hadn’t had a penny for the meter.

She has wrapped his lunchtime snap in yesterday’s Daily Herald, and his white enamelled billy with its lid and wire handle is clean and ready for a brew when he gets where he’s going – there will be no shortage of freshly drawn water.

The kids don’t wear a uniform for St Pat’s – that’s for the sort who are not only able enough but also affluent enough to go on to the Grammar School.

But if you saw him and his oppos climbing into the lorry to take them from Walsall to Lichfield, you might well think that their employer had prescribed their uniform clothing: 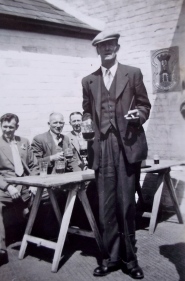 Dressed up to the nines on a club outing…HOw tall he is! There’s a swagger stick under his arm. The young officers he encountered during the first war are duly ridiculed…

However thoroughly you might scour the vintage clothing shop now, in the 21st century, you would struggle to find original examples of a working man’s clothing from the inter war period. Let alone his boots. My mom cleaned her dad’s working boots on Saturdays until they shone like glass, and matched his weekend drinking outfit. Payment: 2d. What more proof do you need that he only owned one pair?

He was worn out too, too young. I was barely two years old when he died, still in his 60’s. Careering past him, delirious with delight at the newly mastered facility with my little limbs, nearly knocking him over.

“I’ll gi’it yo!” – he said , smiling, mock-exasperated, my mother remembers. To me, a shadowy figure, a memory thoroughly overlaid by other people’s reminiscences of him.

He was unsteady on his tired legs, one of which would have to be amputated before that premature death. Those legs that were months up to their knees in mud, in the Great War. Couldn’t have done them much good. But it was the same for all of them.

So, let’s board the work lorry for Lichfield, bleary eyed: “Worro, Ted,” they grunt, as he heaves his long, lean frame up on the back with his bundle. 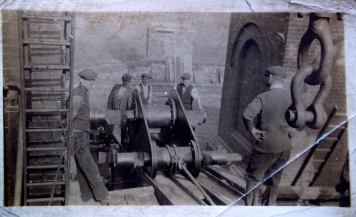 Up to Trent Valley, Lichfield – where a junction in the railway network existed because the South Staffordshire railway (Dudley to Burton) developed, mid-19th century, alongside the London to Manchester line.

Perhaps only the foreman has the privilege of arriving by rail to the site, along with the bulky components of the job.

Adjacent to the premises of the Lichfield Brewery, a water pumping station was established just before the turn of the 20th century. The men, including my grandad, Edward Sheldon, are working for South Staffs Water. Something momentous is going on now, in the 30’s with some large-bore piping. Why else would someone have taken the trouble to photograph the job?  Why else would the images have been kept carefully throughout the lifetime of one of these workers, and, miraculously, preserved in a bedroom drawer through the half a century since he died? 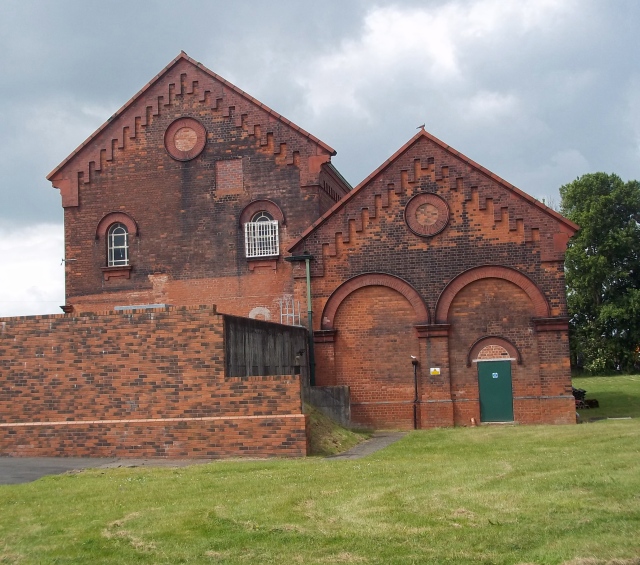 Trent Valley Pumping Station – Its architecture still unmistakeable after 8 decades or so. 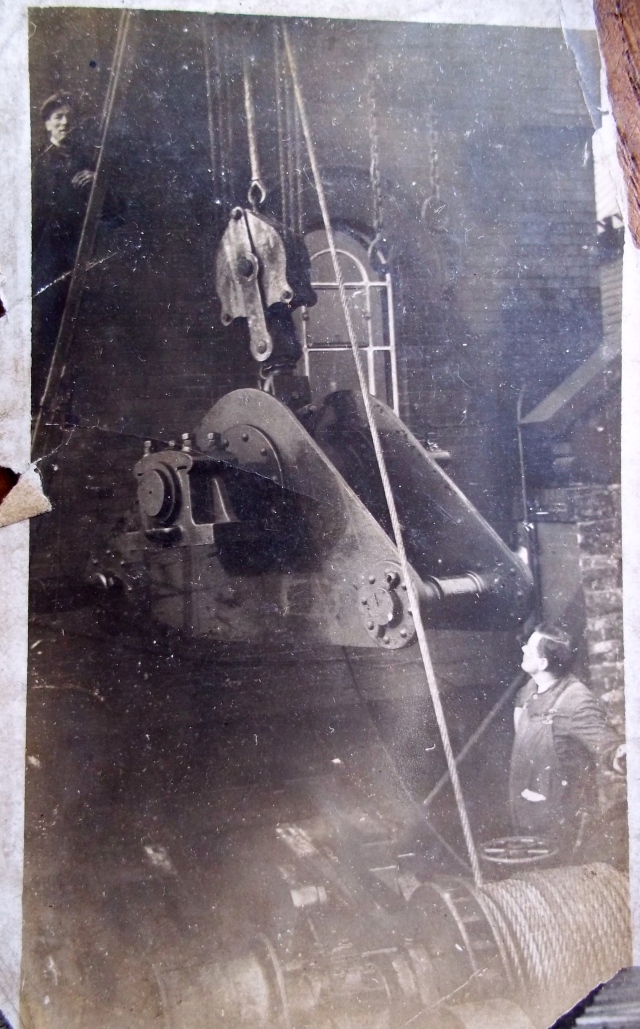 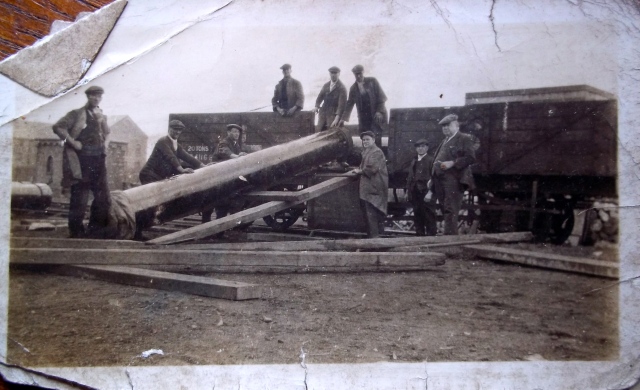 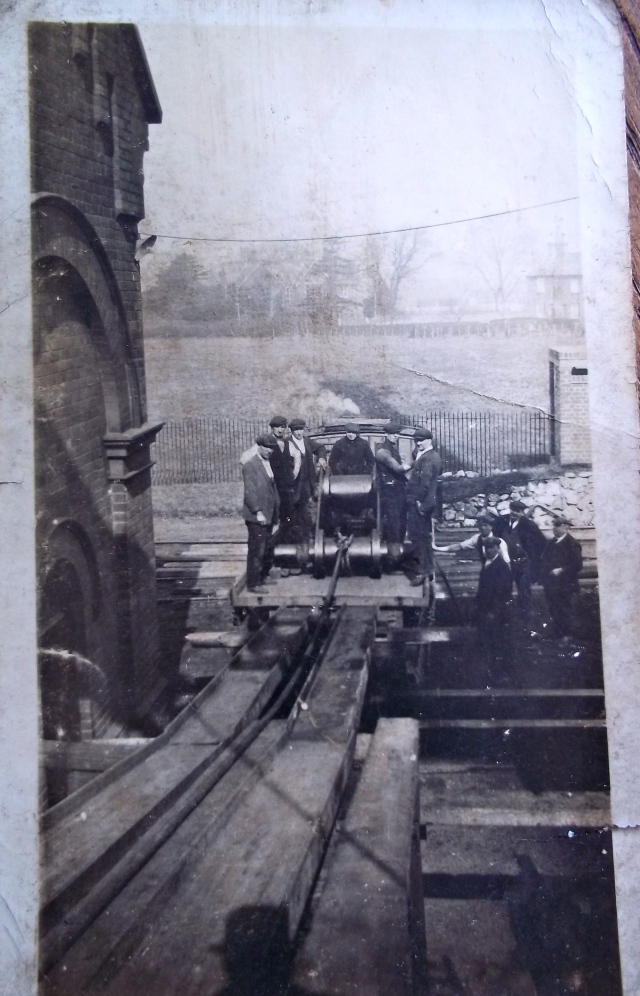 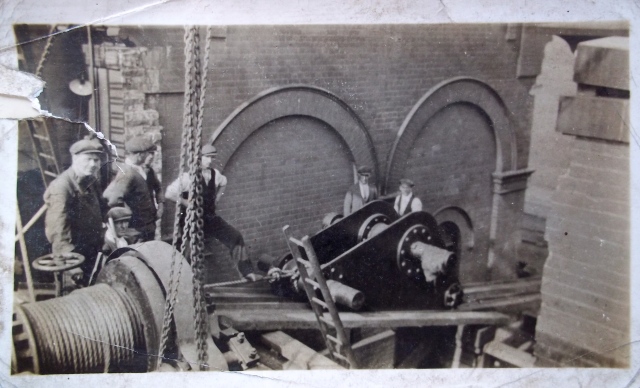 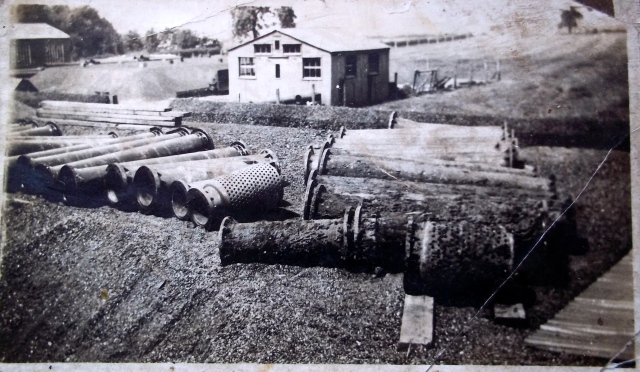 Home at last – but not before a few pints in “The Cottage” on Wolverhampton Road.   Singing the songs of his Irish forebears, he comes in, at last, to his hot meal, and the patient Love-of-his-life.  If there’s a little steak, there will be a fresh egg plucked from its safe home in the sugar bowl and fried as a jaunty topping.

What a long mournful face!  My mother has inherited it – I am always asking her “What’s up?”

“Inside, I’m smiling!” she reassures me.

So was he – “Goo on gi’us yower apron,” he said to the missus – and pinched her sun-hat while he was at it, and gurned ludicrously for the camera! 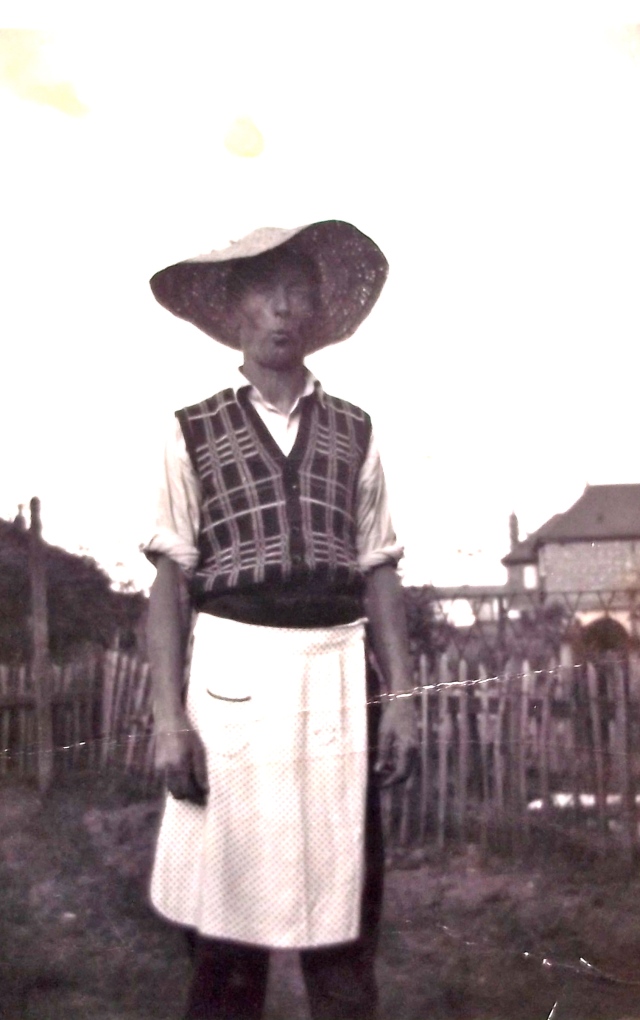 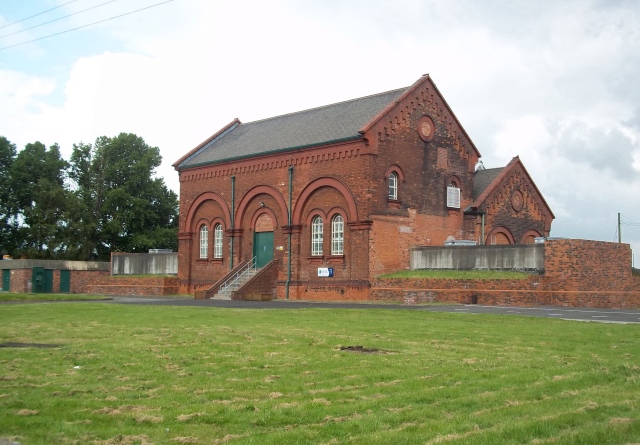 4 Responses to Piping down the valleys wild.