Ken, my husband, dug up this livery button in the vegetable garden of our cottage the other day.

He might be a bit mutton, but he’s still a hawk-eye for a bit of garden archeology, and swooped on what looked like a very dirty coin indeed, until we swilled the gobbets of soil off the back to reveal the shank of a button. After some more soaking and rubbing, the relief casting of a simple crest emerged, with what look like the smallest traces of gilding in its crevices. I have not yet identified the achievement from which this emblem comes.

Horace Roome, a liveried footman at Shugborough Hall, an establishment still grand and wealthy enough to support him in the 1920s when this photograph was taken. Horace Roome worked for the 4th Earl of Lichfield, whose g.g.g.grandparents left Orgreave for Shugborough in 1773. Image: http://www.staffspasttrack.org.uk/

Once upon a time, this button fastened, or merely decorated, a garment worn by a male servant. A garment forming a part of a sort of archaic uniform, known as livery, that identified the servant’s employer. A grant of heraldic arms made to the employer’s family would be echoed in the colour and special adornments of the clothes distributed to these servants. The word livery comes from the Norman French livree, to hand over.

What person may have mislaid this button, this little badge of servitude, as he once traversed the ground  where now is our well-manured ‘tater patch?

To my untutored eye, the back-stamp “Extra superfine – Best quality” doesn’t suggest a date for it as far distant in the past as the 18th century, when Orgreave enjoyed its most intimate aristocratic connections – (that is if we don’t count members of the Jordanian Royal family who make the occasional appearance today). George Adams Anson, his wife Mary, and their children – the eldest of whom would become the first Viscount Anson “Of Shugborough and Orgrave” [sic], left their home at Orgreave Hall  in 1773 to take over their inheritance at Shugborough.

Nor does it look very “1810s”, when the rather fey, devout, Mr and Mrs John Gisborne were amongst the first of the Anson dynasty’s many tenants at the vacated Orgreave Hall.  Not only was the family short of money with which to support staff (It was his inability to purchase the exquisite wooded surroundings of their home at Hollybush near Newborough to save them from enclosure that drove him to Orgreave) – but they were closely connected with the anti-slavery movement, and one wonders whether they would have found it pleasing to enjoy the luxury of being fawned upon by uniformed lackeys. At John’s childhood home, Yoxall Lodge, his brother Thomas Gisborne famously hosted William Wilberforce as he worked on his abolition bill.

Orgreave Hall was downgraded to a working farmhouse rather than a gentleman’s residence in the mid Victorian era – and presumably no footmen or fancy coaches were kept.  Unhappy, “melancholic” farmer Samuel Winter made such a gory mess, much raked over delightedly by the local and national press, when he committed suicide by cutting his own throat in a stable at the rear of the Kings Head in Lichfield in 1847. He was succeeded by Thomas Shipton in the 1850s.  No, I’m looking for a grander household in Orgreave, and a more recent one….. members of whose smartly turned out retinue may have strayed onto what is now our little patch.

This button was not lost, I can be fairly certain, from the clothing of one of the gamekeepers whose home this cottage had been for most of the last century: Harold Johnson, and George Blake and Harry Goring before him, invariably wore a costume of tweed jacket and plus fours when working – even when ministering to the titled “guns” who shot the gentle terrain of the Wychnor Estate – extending to the farms on this, the Orgreave side of the Trent, as the guests of Colonel, and, later, his son, Mr. Harrison.

As the new owners of Keeper’s Cottage, Orgreave in the Spring of 1991, we inherited a  croft at the back that had only recently been cleared of the pens that Mr Johnson, the last gamekeeper, had used to raise game birds. He was a skilled gamekeeper of the old school, and had employed the “Euston” method (pioneered on the Duke of Grafton’s estate near the village of Euston in Suffolk) to multiply the numbers of wild, native, grey partridge on his patch. 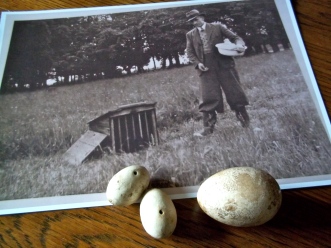 We found dummy partridge eggs – as well as china hens’ eggs in the croft.

Experience had taught him where to find the partridge nests in spring, from which the eggs would be removed, and replaced with dummy ceramic versions. Examples of these little china eggs were amongst the first intriguing bits of garden treasure we ever dug up.

The partridge eggs would be brought back here to incubate in complete safety under broody fowl, to be returned to their real parents as the chicks began to chip the shells. This was the yearly routine where we now wander and hoe amongst vegetable and fruit beds, apple trees and pond. We laid the lawns and quintessentially “cottagey” flower beds at the front where vegetables used to be grown….and no one would know that now.  We have contrived the reality around the imagined picture.

It was over a decade after the First World War when Harold and Ivy Johnson, as newlyweds, had taken up residence here at Keepers Cottage, and the era of liveried “indoor” manservants  – footmen and coachman – had all but passed.

“Harmsworth’s Household Encylopedia” of the inter-war period reminds the householder that he was obliged to purchase an annual 15 shilling licence for each manservant he kept.  This was a piece of legislation instituted in 1870 that remained in force until 1937, making its own petty contribution to the almost terminal decline of male domestic service between those years.

A surviving exception was the new role of chauffeur, whose overcoat, Harmsworth’s instructs, might usefully match the upholstery of the car, and who might dress in a livery redolent of the coachmen of old, whose heirs, in some senses, they were. A certain Mr. James Ashford carried out chauffeuring duties for the Harrisons in 1911, when they were renting Orgreave Hall from the Earl of Lichfield, prior to their purchase of Wychnor Hall, over the river from Orgreave, from Basil Levett.  Billeted in his flat behind the coach house at Wychnor, it was Bert Bloomfield who then drove the Colonel to and from his appointments. It might have been the last thread holding a crested button to one of their coats that frayed untimely to let that button drop. Perhaps there were exchanges  of information between chauffeur and gamekeeper as he tended the pens out there – just where I am looking now from my office window?

The Harrisons kept a butler – not a liveried post –  at Orgreave in 1911 (he had come with them from their previous house at Aldershawe)  – along with eight female servants.

The household of the Burnaby Atkins family – tenants in 1901, had a similar profile. There were 6 maids, a nurse for the children, and 21 year old George Skett – yes, a footman. They were well to do. The daughters of the house, Millicent, Violet, Judith, Cecily and Emily flit fragrantly through the “society” pages of the press in Edwardian Staffordshire.

The coal dust was yet to be brushed off the lucre with which the Harrisons financed their lifestyle.  The source of his family’s wealth came from operating the South Staffordshire coal mines where two of my own great grandfathers once toiled.  Settling down for three generations on this country estate, 10 miles from the grimy industry that paid for it, and then the industry’s nationalisation in 1947 had a distancing effect, and William Harrison was able to concentrate on his passion for the wildlife on the land surrounding Wychnor – both the sporting pursuit of it, and the corresponding interest in protecting it.  With his friend Peter Scott – a very keen shooter turned conservationist – he made a plan to develop a wildfowl sanctuary in the waterlogged plain below Wychnor Hall. It didn’t come to fruition, but he made a positive contribution to conservation on the banks of this stretch of the Trent. In the period since William Harrison’s death in 1975, tenant farmers have continued to run shoots on the estate in pale imitation of him.  But hedgerows and trees, fiercely defended in the old days, are habitually grubbed up and liberally doused with herbicide in the name of efficiency, reducing cover for wild birds, and compromising the habitat of the food chain of which they are part. Pheasants are farmed like poultry before they are put down to be shot, and when I see partridge – as I do – they are more often than not red-legged “Frenchmen” – and not native greys.

And the resources of the Burnaby Atkins? You may read of Mr Burnaby Atkins’ generous benefactions which completely rebuilt the church at Halstead in Kent, where he had inherited an estate and a considerable sum of money from his childless, fairly distant, relative John Pelly Atkins, in 1872.  Who are we to say that the repositioning of the church moved the bustle of the parishioners and the noise of the bells conveniently further from Halstead Place? The conditions of John Pelly Atkins’ will stipulated that The former Mr Burnaby take his name.  Although Burnaby Atkins and his family might live 170 miles away in Orgreave, his deceased benefactor had preferred to think that there would be no intention on his part to distance himself from the source of the fortune – the sugar plantations in the Caribbean, and the six-figure sum with which the British Government compensated his father, John Atkins, erstwhile Lord Mayor of London, for the loss of his enslaved black workforce, at a rate of about £20 a man, or woman.

Ogreave Hall and Keepers Cottage in the 1990s. vegetation and fencing has proliferated, and the two buildings are no longer simultaneously visible.