Those were the Days

St Matthew’s, Walsall, a parish church with Norman origins. In April its Victorian tombstones are interleaved with Myosotis, or “Forget Me Not”

Church Street, Walsall, its course and proportions enduring, but the dwellings and taverns that once crowded its margins – long gone.

My mother’s great grandfather, Thomas Watson Day, was not yet out of his teens. He had left behind all that was familiar to him:  the flat, fertile Fenlands, with low milky ribbons of mist afloat on the peaty fields that his father had farmed, and had made his way alone to lodge in the steep, teeming streets which fell away from the limestone escarpment on which Walsall’s Parish Church of St Matthews had first been sited at least seven hundred years before.

As the April light pushed optimistically through dirty air in this increasingly industrial town, and illuminated what gritty corners it was able to between the close met walls of the houses and courts, the census enumerator worked his way methodically along  Peal Street and up Church Hill.  Reaching the south west corner of the churchyard of St Matthew’s, he followed Church Street as it swept back down the incline to Peal Street, and collected – for later transcription into his ledger – the  individual schedules of the 1861 census that had been completed  – if their level of literacy allowed – by buckle filers, brass polishers, and chain makers. And there are bridle stitchers and saddle stitchers noted, too –  all typifying the many specialised skills needed to produce the leather and lorinery goods for which the town of Walsall was already, in the mid 19th century, internationally famous.

The ancillary services of candlemakers, shopkeepers – and bakers, like Thomas – supported their activities. Some of the unmarried workforce – many in their teens or 20s – boarded in official or unofficial Lodging Houses. Thomas Watson Day rents space in number 8, Church Street, from Edward Jones, aged 24, a carter, and his 20 year old wife Emma.  Lucy Bigmore, a buckle stitcher, who is 21, also lodges there, as does Hannah Robinson, an 18 year old girl employed as a house servant. I can’t help thinking how the age and relationship profile of this household resembles the cast of “Friends,” and that there might have been moments of fun and laughter; of romance, and mutual support between the young people.   I picture them retiring for the night in small dark rooms, further subdivided in the name of decency and modesty with curtains that are strung across them.  There is just a wooden peg or two on which Thomas can hang clothing, and a shelf, perhaps, above his bed.

Unlike Thomas, most inhabitants of the area have been born in the immediate vicinity of Walsall, although a strong contingent of Irish labourers is apparent in the neighbourhood, foreshadowing the marriage alliances that Thomas’s son and grand-daughter will make in Walsall in the decades to come. There are Public Houses, too, and how tiny their stuffy drinking rooms must be.  It is difficult to imagine how so many buildings fitted together on the margins of these old streets. Now prettily fringed by trees instead of squint-eyed houses, the curving  course and narrow extent of Church Street is still apparent if you plod up it today.  At some points neighbours would have been able to reach from one attic window to another above its cobbles, like Kay and Gerda in “The Snow Queen.”

St Matthew’s church and environs from the 1901 Ordnance Survey map, following partial slum clearance, that would be completed only after the Second World War

Thomas Watson Day’s distinctive name would later be bequeathed to two generations of his descendants in Walsall. 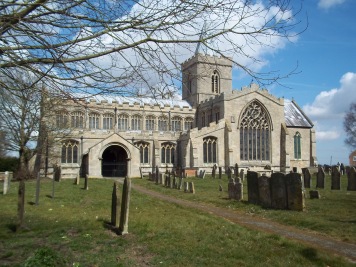 The parish church of St Peter and St Paul, Algarkirk, Lincolnshire. “The little cathedral of the Fens.” The names of members of the Day family pepper its registers, and its gravestones.

Elizabeth Watson and George Day were married on the 25th February 1836 in the in the magnificent, cathedral-like church of St Peter and St Paul in Algarkirk, near Boston, Lincolnshire.  The 1840s saw them prospering on their farm on Algarkirk Fen, if the several farm servants they employed are anything to go by. They were beginning to raise a respectable home-grown workforce –  including their son Thomas Watson Day – when in 1849,  George died, and life changed for Elizabeth.  The 1851 census describes what must have been a miserable come-down.  She is a “Pauper, farmer’s widow”.  She and her fatherless brood of six  are crowded in with her elderly father in Swineshead, with him damningly categorised as “Pauper, former pig jobber” [pig dealer].  The family, with no means of support, were evidently not encouraged to remain in Algarkirk, as a burden on that parish, or indeed on the wider Day clan. The youngest child, Abraham, subsequently went to live with another of his mother’s Watson relatives.  As much Watson as Day, my great great grandfather made the choice to head for Staffordshire, but his motivation for choosing Walsall must remain a mystery.

The turn of the year in 1867 saw Thomas married to a Miss Mary Ann Round.  She had in common with her bridegroom the loss of her father whilst still an infant. But, in the employment-rich, skill hungry, mid 19th century Black Country, as it grew into the “Workshop of the World,” the loss of a male breadwinner was not necessarily as devastating as it was for poor Elizabeth Watson Day: Mary Ann Round’s family confers the welcome genetic inheritance of some sturdy Walsall wenches upon me. The head of her household as she grew up in Birchills Street was her grandmother Phoebe. Phoebe was a widow of 75 years of age, in 1861, and must have continued to retain formidable skill and vigour: she is still described “a Lockmaker.” 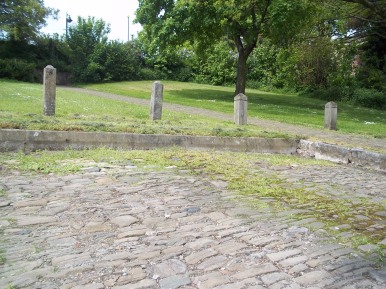 Hill Street, Walsall – or what’s left of it. Surely this is the original road surface. Why does it mean so much to me to tread where the segs on my ancestors’ boots once rang out on the cobbles?

On the eastern slope of Walsall’s Church Hill, Hill Street descends to Ablewell Street.  Marked out like the thoroughfares of a Roman habitation after a careful archaeological excavation, the former “residential” road is flanked by lawn and trees these days and provides a small garden-like oasis in central Walsall.

Here, the 1871 census captures a picture of Thomas Watson Day and Mary Ann in their 20s, him now a “furnaceman” My mother’s dear grandad – also “Thomas Watson Day”, and the second of their children, George, are already at Mary Ann’s knee, and they live in one of many a “court” – or “back-to-back” house on Hill Street.

Thomas is a “Walsall mon” now.

6 Responses to Those were the Days