Posted on June 19, 2013 by staffordshirebred

I find it endlessly interesting how the the female spawn of the British upper classes in bygone centuries were mindfully placed into matrimony at sexual maturity, their identity obscured by a customary (but not inevitable) change of name, only to supply half of the genes of the next generation, and to exercise more than their share of influence on the character and values of their future children.  These women were unencumbered, in their domestic sphere, by the necessity to keep up the din of sabre rattling, or to govern publicly. Their influence is quiet, in “history,” but potent.

The hand that rocks the cradle rules the world.

Although, (as I feel sure you will point out): In literal terms, they will have had someone to do that for them.

Hers is a disinterested stare.  Hers is not a particularly beautiful visage.  The velvet gown, with its diaphanous lace fichu and unbending ribbon laced “stomacher,” in the fashion of the 1740s, are womanly.  The face and figure are girlish, and Mistress Mary Vernon Venables holds up to us, with finely wrought fingers, her floral garland, the symbol of her virginity. 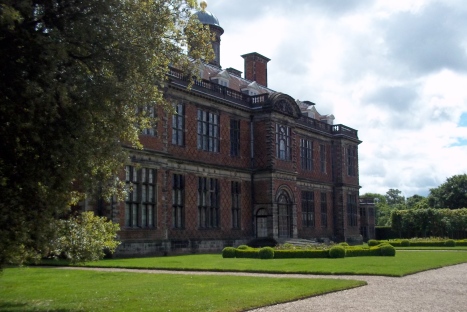 This  portrait hangs, still, in her childhood home, Sudbury Hall, in Derbyshire. This remarkable Restoration era house in Baroque – Jacobean style, old-fashioned even back in Mary’s day, was built for her great-grandfather, George Vernon.

From the gardens to the south of Sudbury Hall through the garden door to the parish church of All Saints. 15th June 2013.

Some seasons passed, and her winter wedding morning dawned late and cold.

Few flowers bloomed in the gardens of the hall to be plucked and woven into her maidenly headdress that day.  There was no posy of roses and orange blossom to be clasped in those delicate hands, or petals to be strewn before her little feet on her route to Sudbury’s parish church of All Saints where the remains of many of her ancestors were interred.  Indeed, as she passed, with her bridal entourage, through this garden door from the grounds of the house,  it will have been festooned with the holly, the ivy, the rosemary and the mistletoe appropriate to the final, and most joyous day of feasting of the Christmas season: It was Wednesday January 5th, Twelfth Night – 1763.

Set into the wall here is an inscription:

“All good gifts around us, Are sent from heaven above.”

All Saints Parish Church, Sudbury, Derbyshire, 15th June 2013.
Remnants of Norman masonry can be found in the edifice which is thought to have been rebuilt around 1300.
With several later renovations and “improvements.”

Marry when the year is new,  he’ll be loving, kind and true

……went the old rhyme.  And who could ask for more?  Except perhaps that he , her groom, George Adams, 32 years old, Member of Parliament, should be the chosen heir to the fortunes of his two childless uncles. And that he, in the coming decade of anticipation before those bequests are his, should make you mistress of a pleasing small country house, viz Orgreave Hall, sitting, graciously, in pleasant countryside, only 12 miles from the familiar surroundings of Sudbury, but south of Derbyshire’s border with Staffordshire that is formed by the trout-rich river Dove of Izaak Walton.

If snow did fall on George Adams and Mary’s wedding day that early January day, its auspices of fertility and wealth  – according to another old superstition, were fulfilled wonderfully. Their family comprised at least eight healthy children.  George’s inheritance was to be most considerable:

George Adams’s great, great grandfather, William Anson of Dunston had purchased the Shugborough Estate in 1624.  In the time of this William’s grandson – another William Anson, the old half-timbered manor house was demolished in favour of the construction of a mansion of classical design.  William and his wife Isabella Carrier seemed to have made adequate dynastic provision for their estate: After a daughter, born in 1690, they successfully produced a male heir, Thomas, in 1695, and a further son two years later.

Unfortunately for the future of name of Anson, Thomas, their heir never married.  However, his extended tours of Europe, in the company of his fellow, unmarried, artistically minded, young men provided inspiration for the Greek and Italian flavour of the splendid remodelling of Shugborough in the 18th century. His brother George, despite being bred as far from the coast as is possible in Britain, became one of its most celebrated Admirals.  He spent his bachelor years leading his men to victory in naval battles, circumnavigating the world, and making his enormous fortune in true “Boys Own” style by capturing a Spanish galleon laden with pieces of eight. Aged 50, in 1747, he became Lord Anson in recognition of his achievements and finally found time to marry – the 23 year old Elizabeth York. Sadly, and with no known connection to the decades spent in the company of sailors, the marriage was “without issue.”

Admiral George Anson’s sizeable wealth was well employed in the work of extending and adorning Shugborough, but he also went shopping for additional real estate within the county of Staffordshire and elsewhere. In 1752, he bought the whole manor of Alrewas, including its grandest dwelling, Orgreave Hall, from the Turton family, who had held the manor throughout the preceding century. His other estates in the home counties seem to have been Admiral Anson’s preferred residences in his declining years, and so it is not thought that he lived at Orgreave Hall, but he must surely have visited it.

His death came in June of 1762, and Alrewas, and Orgreave Hall, and the future interest of his fortune passed to George Adams, the son of his sister Janette and her Shropshire gentleman husband, Sambrooke Adams. Was this the point at which the betrothal of George Adams and Mary Venables Vernon was decided upon?  Their marriage took place  at Sudbury exactly 6 months later.

Shugborough Hall, Milford, Staffordshire, June 2013.
Without Wyatt’s ponderous portico, and the mid 18th century wings, the core of the building is much the size and shape of Orgreave Hall,
but not nearly so pretty.

With the death of his uncle Thomas Anson at Shugborough in 1773, George Adams promptly amended his family’s name to Anson, and he, Mary, and their growing brood of children hot-footed it back to the splendours of his inheritance on the northern side of Cannock Chase, leaving Orgreave available to be let to a long, long series of varied and interesting tenants. Farmers, poets, suicides, brewers, botanists, and industrialists, they form a captivating procession of dramatis personae, as they dawdle on Orgreave Hall’s lawns, and receive their guests in the reception rooms which were once as good as Shugborough’s before those were aggrandised by plundered gold.

The Alrewas Estate, and Orgreave Hall, were to remain the property of the direct descendants of George Adams and Mary Venables Vernon until their great great great grandson, Thomas Edward Anson, the 4th Earl of Lichfield, finally auctioned it off in 1953.

I don’t believe that the beauty of the Staffordshire landscape captivated Mary.  Or that the undoubted charms of nearby Lichfield were found sufficient to entertain her, despite it being in its heyday as the clean, vibrant little “City of Philosophers”  to which Dr Johnson brought his friend Boswell to show him “genuine civilised life.” In widowhood she repaired to her town house at 49, Queen Anne Street, in London’s fashionable Marylebone, where she died, aged 82, in December 1821. In her lifetime she saw a dramatic rise in status for the family she was born into and also the one into which she married.  Her father, George Venables Vernon, after some shameless self-promotion, was created the 1st Baron Vernon of Kinderton in 1762, which conferred the title of “Honourable” upon his children, including his daughter Mary. She saw her eldest son by her husband George, Thomas Anson, created 1st Viscount Anson of Shugborough and Orgrave [sic] in 1806.  Either sumptuously entertaining powerful people at Shugborough Hall, or long service, in his father’s footsteps as a Member of Parliament had done the trick.  Or both.

Mary’s dynastic mating was a success on her family’s terms.  But was it a happy marriage?  Who dares to speculate after 200 years?

The last purported date for the completion of the “Shepherd’s Monument” in the park at Shugborough is 1763, the year of Mary and George Adams’s union, and shortly after the death of Admiral Vernon. Historian AJ Morton, amongst thousands of others over the years, has had a crack at unlocking the meaning of the enigmatic inscription it bears: OUOSVAVV, framed at either end by DM, and contorts  a connection with our Mary and George.  The Telegraph reported in 2011

My attention is drawn to the monument’s depiction by sculptor Peter Scheemakers, in imitation of an original painting by Poussin, of a woman and three shepherds, two of whom are pointing to a tomb, on which is inscribed “Et in Arcadia ego”. The design was chosen by Thomas Anson.  Are we seeing a stylised representation of the older, childless uncles, contemplating their imminent demise, handing on the family’s hard-won Arcadia in Staffordshire to the young couple Mary and George? 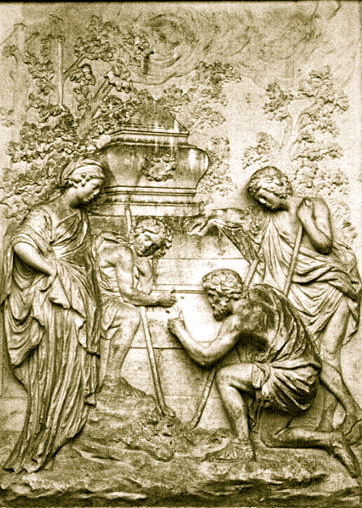