Posted on June 7, 2013 by staffordshirebred

Dawn in midwinter on the Trent at Orgreave.

A pretty spot on the River Trent near Orgreave. June 2013.

The most significant topographical feature of the hamlet of Orgreave, in Staffordshire, is its own stretch of the River Trent.  This meanders capriciously within level banks, almost invisible until you are upon it, alerted to its presence only by the brassy little bleats of a pair of indignant mallard  – put up when they hear you approaching their nesting site. This familiar mile or so lies between the Trent’s confluence with the Blithe at Kings Bromley, and the place where the dainty Swarbourn, having dribbled gently alongside at a coy distance through the Yoxall meadows, suddenly curls tightly to throw in its lot with it at Wychnor.

In the absence of any landmark or elevated ground on which to frame the scheme of a morning walk, the river draws my loping boots to it in winter. In summer my dusty sandals, in their turn, make their way north, northwest from the bottom of the garden.

Two fields are traversed to reach the river, and they are strewn with magnificently various hues of pebbles, which are like the scattered contents of a box of broken jewellery when the sun shines on them after a shower on newly ploughed ground. These relics, and the sandy loam, and the sudden interspersions of clay soil (a “cat-muck” field, as described by my farmer neighbours, frustrated at their claggy ploughshares) betray the aeons of alluvial activity hereabouts.

Linguists speculate that Orgreave’s name is derived from a compound of the Anglo-Saxon words ord, “spear blade, edge” and graefe, “grove, wood”, and could be translated as “at the brink of the forest”.  Although such retrospective assumptions can be flawed, the logic of this one is sound.  A thousand years ago, this settlement lay in the far north-west of the vast “Cank Wood” from which present day “Cannock Chase” derives its name.  Cank Wood was bordered by the River Trent.  The river had created wide fertile, treeless meadows along its shores, and dwellings and farmsteads of long ago were,  naturally,  constructed just beyond the washlands of flood waters, and, therefore, at the woodland edge.

From the War Memorial in Wychnor Churchyard, over the undulations marking the site of earlier settlement, the next high ground over the valley of the River Trent is Cannock Chase. January 2013.

Standing in the shallow river with Orgreave behind you, you will see that the land rises gently, very gently away to the north.  Wychnor, to your right, even at a modest elevation of about 240 feet, provides a vantage point over this level river valley.  When, in the winter months, the river is in spate and some of the meadows are flooded, it is necessary to travel to Alrewas or Yoxall to cross the water and reach this rise in the terrain.

To your left, the hamlet of “Woodhouses” sits only slightly higher than the river bank behind Meadow Road, Yoxall, both names clearly derived from the former profile of the land.  Here, once, began the Needwood Forest, a famously beautiful sylvan landscape, of which large enough tracts remain today to form an impression of the atmosphere of the mythical dwelling place of Sir Gawain’s Green Knight –  before clearance and “enclosures”.

Wychnor Park, in its attractive riverside setting. Not a beautiful building, in my opinion.

The north elevation of Orgreave Hall peeps over the meadows which divide it from the River. They are picturesque with toxic buttercup, making the pasture dangerous, but proving the wetness of the land.

When the family of Colonel Harrison, scion of wealthy industrialists, moved their numerous household from Orgreave Hall to Wychnor Park during “The Long Summer” before the outbreak of the Great War, local anecdote has it that Mrs. Harrison took off her shoes, and gathered up her skirts, and waded across the ford in the river to her new home, beside the horse-drawn carts which were bearing her chattels there.  Edith Harrison, née Gardner, was a local, Kings Bromley girl, by birth, although she spent much of her childhood in nearby Armitage. This can’t, surely, have been the first time her toes had tangled in the warm, emerald-green weed in these shallow waters.

In ordinary-length  Wellington boots, let alone fishermen’s waders, there are places where crossing the Trent by foot from Orgreave Meadows is perfectly possible in season.  Indeed, on a hot summer’s day, when a complete dip is desired, it is not an easy matter to find a spot deep enough to bathe, although I have seen this done. The cheerful, grinning oarsmen of canoes and –  excitingly, timelessly –  coracles, have also been seen to navigate past, but keeping mindfully to the sufficient depths in the middle of the river’s flow.

That this slight, watery, barrier was considered to be the frontier between The South and The North of England is something I often contemplate as I recline on a convenient, sloping, riparian willow trunk at a particularly picturesque curve in its course from Biddulph Moor to the Humber estuary, in the gorgeous haze of a hundred blue damselflies, hoping for a glimpse of the kingfishers.

With kind acknowledgements to Bill Hill of Hall Farm, Orgreave, for his reminiscences, and to the comprehensive and readable “A History of Alrewas,” by Norman Stubbs and Roger Hailwood. 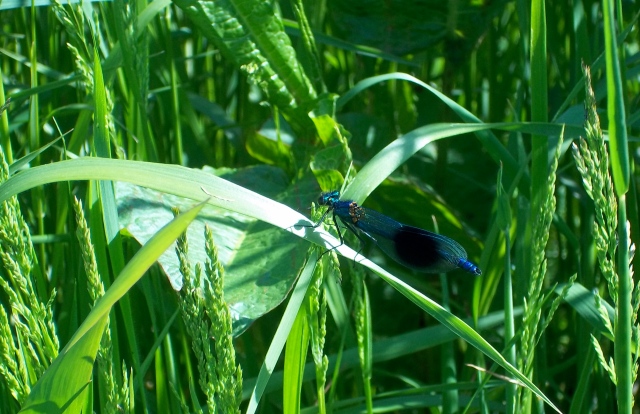 Damselfly in the rich foliage on the bank of the River Trent at Orgreave. June 7th, 2013.