Add other ingredients and mix well

Posted on January 5, 2015 by staffordshirebred 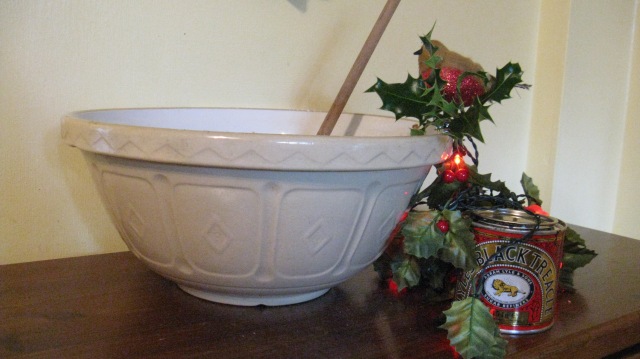 I paused  – for the purpose of taking this photograph – from heaving my wooden spoon around the luscious, peaty amalgam of this season’s rather late Christmas Cake. This huge and precious old Mason and Cash mixing bowl had only just come into my possession as a Christmas gift from my aunt, Irene, and I couldn’t wait to try it out.

There was here only one scant week of advent remaining for the piercing and dripping of strong brown drink to ‘feed’ the uniquely stiff and fragrant mixture, glistening both tawny and ruby with the fruits of exotic tree and vine. The recipe that has evolved into “Christmas Cake” was, historically, prepared for consumption on Twelfth Night, January 5th, rather than Christmas Day. Our cake, now iced, beribboned, and adorned with some bristly little fake conifers and a small herd of plastic deer, should be fit for consumption by then.

This big bowl won’t fit into any of my cupboards but it is a pleasure to have it readily to hand to knead my bread dough in its roomy interior.  The open angle of the cross-section, the grippable raised lip, and the weighty stability of the whole, are some of its practical and distinctive attributes.  It just makes the job easy. No wonder the design has endured to long.

It dwarfs the useful No.24 bowl that has already been passed on to me by my mother, but which was amply proportioned for whipping up a Victoria Sponge or a few rock cakes for childhood teas to spread before our single-offspring family. No, this giant is a No.6 – almost the biggest size of the iconic “Cane” bowls (from the distinctive colour) that begun to be made by Mason Cash and Co near Swadlincote in 1901, and have not changed in appearance since, despite the company having now been taken over.  Production in Derbyshire has now ceased, having moved to somewhere much further east. The size designations refer to the number of bowls that would fit into a firing in the original Church Gresley kiln – the smaller the number, the larger the bowl.

After what must be many decades of service, it has travelled with me back across the Midlands towards its place of manufacture. It comes to me with a treasured family provenance, having been handed down to Irene from her mother-in-law. What a sweet blend can be made when the miscellany of family has a new ingredient added.

In the 1950’s, Irene – my mother’s practical, capable, and lovely younger sister – left her job as manageress of Dorothy Perkins’ Worcester shop to marry into a clan that for several generations had earned their Worcestershire living as farmers and blacksmiths, in and around Pershore, Powick, and Upton upon Severn.

Here, on his wedding photograph, Trevor’s huge hands tell of the Grizzells’ genetic aptitude for wrestling their livestock into profit, or for making dancingly effortless the heaving arc of a hefty hammer onto a ringing anvil. I loved to hear the family adage that, on their wedding day, Trevor could easily encircle his bride’s waist with his two hands. This was testament to the siren slenderness of the waist, too.  I remember, in my ‘teens, the treat of being allowed to try on this lovely dress.  I sashayed coquettishly down the old oak staircase in the pink washed, timber framed farmhouse convincingly enough – but with one unseen hand holding together the two sides of the zip, that refused to meet around me.

The compass of the voice and personality matched the hands.  At 13 or 14 years old he’d greet me on family visits with a “Boiy Croist!” (his Worcestershire accent redolent of Ambridge) in mock horror at some offensive aspect of what I had believed to be a supremely stylish sartorial ensemble.

He and Irene had three sons. It was fair of him, I now realise, not to discriminate either in favour or against this little girl’s well-honed sense of dignity. Before I grew too tall, I was scooped up and held, squealing, upside down by the ankles in those enormous hands,  like his reared-for-Christmas poultry – with my feathers well and truly ruffled. My name is Sue; How do you do, he bawled at me, excruciatingly, a hundred times over, when, just after my 8th birthday, Johnny Cash’s song “A Boy named Sue” rocketed up the singles charts, a gift to Uncle Trevor’s gentle campaign of torture.  What doesn’t kill you makes you strong.

Despite my ordeals, our visits were hours of delight to me. Hours of dogs, and lambs, and my cousin Nigel’s pony.  There was fruit picking in the orchard, walking the stock, and fishing expeditions (my father so chucklingly delighted on the single afternoon that my keep-net writhed with more weight of little Severn River gudgeon than my cousins’ did). And then there was the tucking in, a companionable eight of us round the kitchen table, swinging my legs happily on my chair, enjoying the feeling of belonging to the cohered group. Across the stiffly creased white linen tablecloth I observed the particular affection between my mother and her sister, and the quiet rivalry between the brothers-in-law.

A tender plant, grown under glass, needs “hardening off” gradually before it is planted out permanently into the uncertain climate outdoors.  It was in this spirit that my parents later allowed me away from my protected home environment for more protracted visits to Cowhills Farm, the “tied” house on the large acreage that Uncle Trevor brilliantly managed for his employers. Now, intrigued and fascinated by farming to a greater extent than any of his sons seemed to be, I felt privileged to accompany him to market at Worcester, Ledbury or Gloucester, where he knew everyone and everyone knew him, a fine stockman also brimming with bonhomie.  He seemed proud when my career aspirations began to coalesce into a strong desire to become an auctioneer myself.

I also see my over made-up teenaged self lolling at that farmhouse kitchen table, near the warming Rayburn: sighing, pouting, and pondering about my future.  Briskly and willingly, my aunt wielded her batterie de cuisine around the obstruction – including what was to be, 30 odd years later, my prized mixing bowl. The bowl in which Uncle Trevor’s childhood cakes had in their turn been mixed. Perhaps even those of his mother, Emily, in the forge at Powick.

No longer just an observer of the alchemy, a licker of the spoon, now I have to make my own cake.

4 Responses to Add other ingredients and mix well