A site to see.

Posted on October 17, 2013 by staffordshirebred 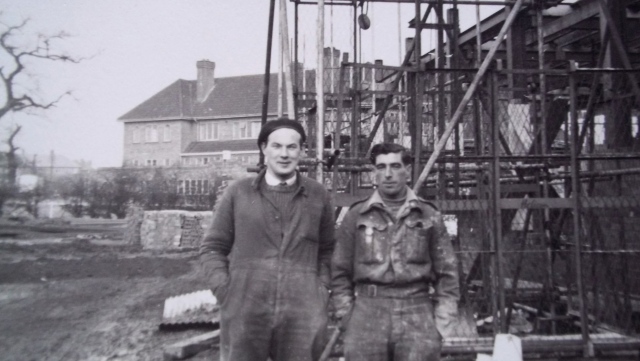 When me and my dad were discussing our mortality, more ominously pertinent in the last years of his life, he used to say to me: “In a thousand years, Sue, it’ll be as if we’d never been here.”  My mom and my husband would each have staggered off, full of roast dinner, taking the Sunday newspapers to a comfier chair. In the kitchen of my cottage, my dad and I remained sitting side by side; my right mitt would be flat on the table between us, and his, large, yet elegant, dry, warm left hand over mine, anchoring us in conversation, both spoken and unspoken. It was comforting to imagine that we two atheists would moulder anonymously into the quiet earth. Together in our not existing, and together not inhabiting an afterlife.  But there was going to be a terrible parting to be endured.

Just a decade later, and his imprint on life is far from gone. Many of his possessions surround me. I can look through his eyes into his life through his photographs, admire many other examples of his creativity, and feel the smoothness where his strong hand gripped the wooden handles of the tools we have inherited.   In the fabric of our cottage and garden, are walls that he re-rendered and plastered for us, the skirting boards and wainscotting that he mitred and cut and fixed, ceilings we papered together, and vegetable beds that he and I cultivated companiably.  I couldn’t bear to remove the parsnips he had put in for us during his last early spring – in the patch by the greenhouse that he had erected with Ken, on top of the brick base he had built. I worked round them through six tearful seasons, until they flowered and then set seed, to the delight of the bullfinches.

And what about that thousand years into the future he spoke of? As a builder, perhaps my father, Ted Horton’s legacy has a better chance than many of enduring a whole millennium. What, I ask you, does remain, now, as physical evidence of the lives of our ancestors in Staffordshire a thousand years ago? The layouts of their settlements and their thoroughfares are just the shadows of their living movements, but a stone laid upon a stone, with mortar between – enduring in the lower courses of Lichfield Cathedral’s masonry, or the walls of Tamworth castle, is a fragment of tangible immortality for the individual skilled working man who placed it there.

Throughout his working life, my dad must have laid millions of bricks, especially in the early days when he was brickying a lot of the time.  Up to a thousand times per day, the familiar rhythm:  a blob of wet, grainy compo, scrape, scrape, then placement, and a wiggle into its place, of a good Staffordshire brick.  Surely some of them must survive, one overlapping the other, eroding slowly over the coming centuries.

My dad and his two brothers all chose to work in the building industry.  The coal mines in Walsall Wood and Aldridge – that were becoming  worked out as Bill, George, and Ted reached employable age in the 1930s – had seduced their grandfather’s generation of the family from agricultural labouring in and around Stonnall to better wages and more modern housing.  Pop and Ma – that is my grandparents, Lizzie and Noah – had come back to a primitive country smallholding to bring up their brood of five in Footherley. This, my father knew. But he may not have had any idea that his great, great, grandfather (his ancestor twice over, thanks to our family tree’s habit of “kissing” branches) had built walls for a living like him.  William Horton, (1792-1872) lived all his life only a mile or so away, in Lynn,  from my dad’s home at Keepers Cottage, Footherley. This patriarch is documented on the 19th century census returns, up to 1871, in his 77th year, as “bricklayer.” My dad certainly loved his job, for which he had a natural talent.  Perhaps it was “in the blood.”

My dad at about the time he was leaving Shenstone school in 1939, with his obstreperous goat, Billy. In the field at Keepers Cottage, Footherley, with the bridge over the Footherley brook in the background.

Edwin Noah Horton left Shenstone C.E. school in the village in August 1939 with the following kind words on his report from Mr Saxton, the headmaster: “A steady and reliable boy.  He works well and can be trusted to finish a job.  Has shown great improvement in the last year.  I can recommend him.” Earlier in his school career, Mr Saxton had been more stern: “Does not do himself justice”  “Could do very well indeed if he would”  “He is inclined to let other things take his attention” are among the remarks written on school reports earlier in the 1930s, when “recitation” was a skill to be prized beside mathematics and reading, and the one academic discipline at which my father seemed to excel.  That other things took his attention was true. Book learning had not been high on his list of priorities.  Distractions included his rabbit breeding business/hobby, the odd day’s building work with his brothers, and being fetched out of school by Ma, for him to remove his unbiddable billy goat who would be head-down in the middle of Footherley Lane, defying any traffic to pass their cottage.

My dad turned 14 on August 31st 1939, the day before war broke out, which meant an unusual employment market for the young school leaver, as able bodied men volunteered for military service.  His first position was as a chauffeur-gardener to the Godrich family at Shenstone House.  Abraham Godrich had made the family fortune rapidly as a wire manufacturer in Nechells, Birmingham, and the family had gentrified as they relocated, via a villa in Streetly to the little mansion in Shenstone.  Remarkably, young Edwin Horton was tasked with driving their daughter Patricia, only a few months younger than himself, to school and back each day in their limousine. 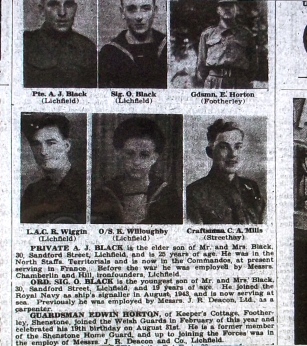 The Lichfield “Mercury”, Friday September 15th, 1944: “Guardsman Edwin Horton, of Keeper’s Cottage, Footherley, Shenstone, joined the Welsh Guards in February of this year and celebrated his 19th birthday on August 31st. He is a former member of the Shenstone Home Guard, and up to joining the Forces was in the employ of Messrs. J.R. Deacon and Co., Lichfield.

His bricklaying apprenticeship with J. R. Deacon in Lichfield followed.  Employment with them was interrupted by his service in the Welsh Guards, but they were pleased to re-engage him after the war.

In about 1951, J.R. Deacon and Co were fulfilling a large contract in Great Barr – the construction of the Brooklyn Farm Technical College.  This was an impressive project for the time, and my dad took his camera to work with him to document the construction of the building and some of the men who worked on it.  The building’s still there – now renamed the James Watt Campus of Birmingham Metropolitan University – as is the “Drake’s Drum” – the pub over the road which can be noticed in the photos.  Like my dad, most of those depicted will now be playing rainy-day, three card brag in the great site-hut in the sky – but it would be so good if some of them could be identified. Perhaps, in the computer networks of the future, there will be another way for a working man to be remembered after a thousand years. 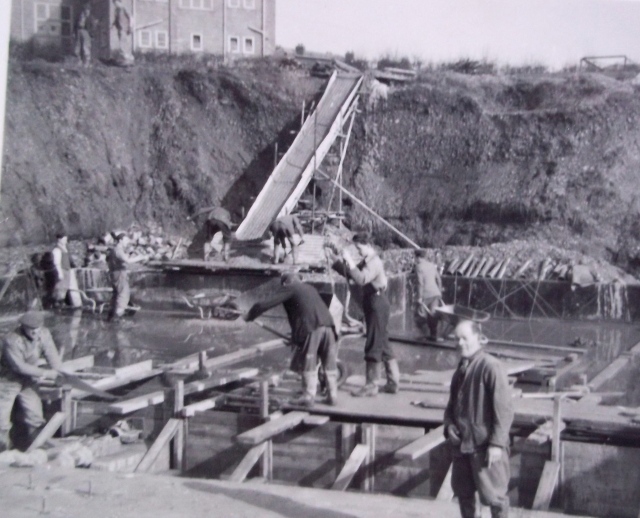 From a deep, muddy hole in the ground, Brooklyn Farm Technical College is born, while the “Drake’s Drum” public house looks on, anticipating many years of future business 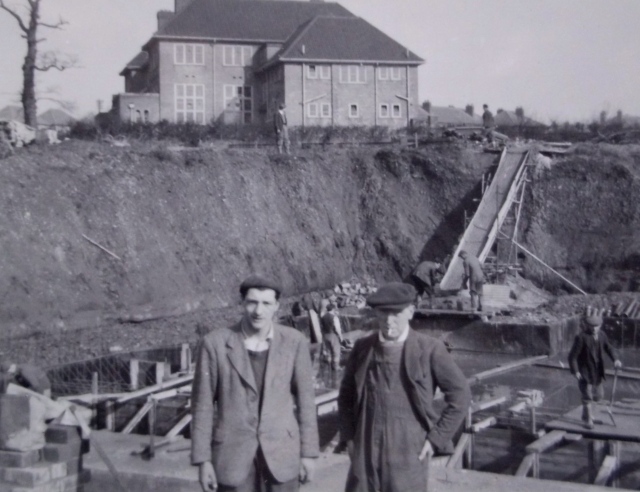 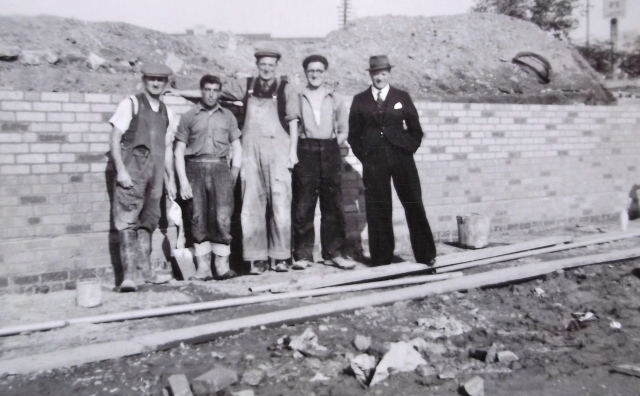 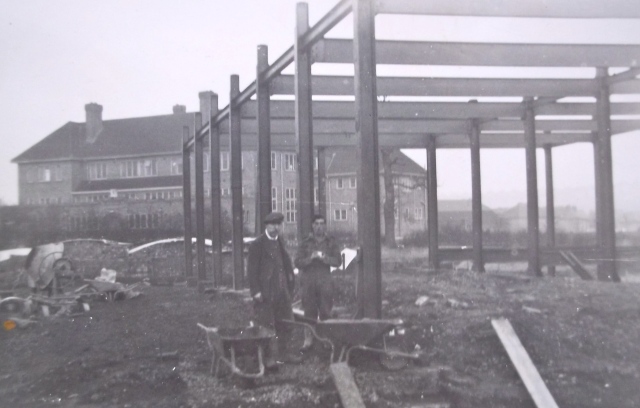 The steel superstructure rises out of the ground. 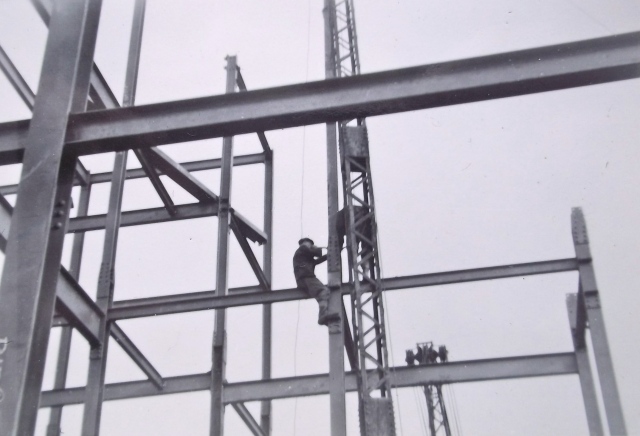 Insert your own remarks about Health and Safety at work here. 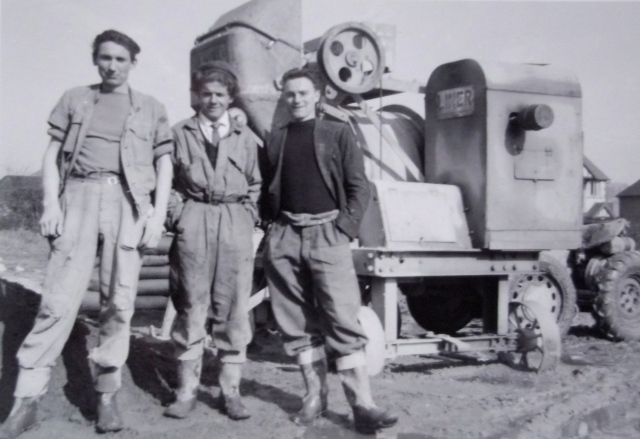 Parts of the building are clearly recognisable today.

I love this photo of two of my dad’s colleagues. Look at the chap pointing in the background. Worthy of Picture Post, I think.

Where is this building site? Who is this chap who looks like an extra from “The Grapes of Wrath??” What is this car?? The badge on the grille says “S.M” if that’s any clue. Looks non-British. I have trawled the web in vain for clues.

32 Responses to A site to see.