Posted on October 2, 2013 by staffordshirebred

“Baier; Alfred” the prisoner inscribed, obediently, in blue ink on the form.

Although strong and stocky, “Gerry Alfred”,  (so called to distinguish him from his farmer-employer, my uncle, Alf Cooper) was, it seems, not very tall. He was the last in a numerous line of varied POW’s who augmented the workforce of the Owletts Hall Farm, and the Dairy Farm on Lynn Lane, Shenstone in the 1940’s – all hard workers, and some who remained friends for years after the war.

A copy of the comprehensive list of rules applying to the conduct and treatment of Prisoner Baier was left with the Cooper family, my Uncle Alfred, Aunt Mary, and their infant daughter, my cousin Rosalind.

For their part, they were to provide the prisoner “with suitable lodging quarters and full board”.  The conditions of the accommodation were described in detail – the man should be supplied with

“straw to fill palliasses, artificial light, heating, crockery, facilities for washing.” This might be within the farmhouse or “in a suitable farm building (e.g. barn or outhouse)”

Sternly underlined was the admonition: “Empty cottages which are suitable for civilian farm workers must not be used for  accommodating prisoners.”

A cottage should stand unused rather than offer shelter to a German, but in matters of food, there should be strict impartiality: “Each prisoner who lives and works on your farm must be provided with three meals a day on the same scale as for a British farm worker who lives in.  The prisoner will come under the civil rationing scheme. The Camp Commandant will issue ration books.  Farmers will be able to obtain the agricultural cheese ration for prisoners”  The standard cheese ration, per person, per week, which had been as much as 8 ounces earlier in the war, was now down to 2 ounces – a quantity equivalent to a couple of bites of a single evening snack in today’s gluttonous times.

Alfred Baier at work on Owlett’s Hall Farm in the 1940s. Puppy Duppy sits happily at his feet, unaware of the German’s culinary designs upon her.

Aunt Mary was a resourceful cook, but like everyone, Gerry Alf was prone to complain about the monotony of the austere diet.  ” Feesh …feesh…all the time blutty feesh, ” was his frequent refrain, and although she was very young at the time, Ros remembers him looking, with wide, mischievous eyes at her little dog and saying,  ” Pup in oven…gut ”

Conditions of employment included the receipt of modest wages, and the POW’s medical and dental treatment for was to be paid for by the Army Authorities, who also supplied his clothes. He was to wear battle dress, but emblazoned on the back with an almost comical large patch of felt, which displayed his POW status.  The authorities had been at pains to determine each captured alien’s degree of loyalty to the National Socialist regime he had been fighting for. The colour of the patch on their costume indicated the result of their assessment.  Lighter coloured patches indicated a relative indifference to politics.  Black patches flagged up an unrepentant Nazi – but such prisoners were seldom seen in a camp like No. 96 at Rugeley – (now invisible under the site of a sewage farm on the Rugeley-Stafford road) – they were usually dispersed to camps in remoter areas of the country, well out of harm’s way.

Nevertheless, the movements and conduct of German workers such as Alfred Baier were severely restricted.  Their employer, in the terms of the documents which accompanied his placement in Lynn Lane, was to ensure that he strayed no further than a mile from the premises, extended, with permission, and only during hours of daylight, to 5 miles on Sundays, when he was to enjoy a full day off.  Alfred had also signed his agreement to regulations which forbad fraternisation.  In particular,

German Prisoners of War may converse with members of the public but they will be warned that should any instances occur of a P.W. having entertained an attempted advance of an amorous or sexual nature he will render himself liable to vigorous and exemplary punishment.

Harsh but practical restrictions during war-time, you might say, with resignation, but it may come as a surprise to you that the date of Alfred Baier’s placement with my Uncle was 15th July 1947, over two years after VE Day, May 8th 1945, which marked the surrender of Germany to the Allies, and the end of hostilities of World War Two in Europe.

It was no idle threat that the authorities would seriously respond to breaches of the rules: A couple of months before Alfred arrived in Lynn, on the 30th May 1947 his fellow prisoner at Camp 69, Rugeley, Otto Port, was charged at a Court Martial with “conduct to the prejudice of good order and discipline amongst prisoners of war” as a result of being found at 5 a.m. in a  hut on Tatenhill Aerodrome with a 17 year old housemaid from Burton called Eunice Jackson.  The case received extensive coverage in the press, and a very comprehensive account of the trial at Rugeley was published in The Lichfield Mercury of June 6th.  An audience were clearly agog to hear details of the young couple’s antics.  As the paper reports: “The Court was crowded by German prisoners, whilst the proceedings were also watched with interest by the Lord Lieutenant of Staffordshire, (Lord Harrowby) and Lady Harrowby.”

Constable Tomkinson was able to relate to the avid onlookers the prurient details of a heap of radar paper strips visible to him in the airfield hut, which bore a guilty impression as if two bodies had been lying down upon them…..together!

President of the Court, Major l’Estrange, remarked that Eunice was “an extremely foolish girl,” for giving a false name, refusing to answer questions, and being so impertinent. The Defending Officer’s suggestion that it had been Eunice who was running after Otto, seems to have been widely accepted.

Otto was just 20 years old.  Can we blame him, far from home, for succumbing to the attentions of a flibbertigibbet housemaid from Horninglow Street? The court heard that the “accused was a product of Hitlerite Germany, and yet, despite the doctrine and teaching of the creed of the superior race he was not a Hitlerite Nazi.  In fact he had taken an active part in assisting victims of Nazi persecution.”  How I would love to hear Otto’s account of his war.

If the purported romance between Otto and Eunice does not impress you as a great Love Story, there were other contemporary liaisons formed between British girls and German prisoners which endured despite overwhelming opposition from their families and the authorities. June and Heinz Fellbrich celebrated their Diamond Wedding Anniversary in August 2007, their 1947 nuptials in Hampshire being said to be one of the first to have permission to take place between a POW and a British girl, following a slight easing of the anti-fraternisation rules.  Despite being given permission to marry his pregnant girlfriend, (a degree of fraternisation had evidently escaped the eagle-eyed authorities) Heinz spent his wedding night back in the Camp, only being finally released some six months later. When ATS Sergeant Monica Cann married POW Leo Ganter clandestinely in Shropshire some months earlier, questions about the misdemeanour had been raised in Parliament.

In their treatment of German prisoners, Clement Attlee’s post-war Labour government seemed to be barefacedly flouting the Geneva Convention of 1929 which stated that at the end of hostilities all prisoners should be released and repatriated without delay. They were actually exploiting a “loophole” created by the circumstances of Germany’s surrender  – the Potsdam agreement was, technically, “provisional.”* But they had good reasons of their own to adopt this policy.  Food shortages were a continuing and worsening problem.  As many hands as possible were needed to work the land. During a parliamentary debate in April 1947, the Secretary to the Ministry of Labour, Mr Ness Evans, revealed the statistic that 163,500 German prisoners of war in Britain were currently allocated for agriculture, and assured the House that there was no intention of decreasing that number before the harvest. The Conservative MP for Leominster, Archer Baldwin,  spoke up for this sizeable army of forced labour in the debate, and enumerated the shocking fact about the “wages” they were receiving for their work:

It is of importance that the German prisoners should be kept at least for this season. We are desperately short of men. But after two years, I think it is time that these prisoners of war were paid appropriately for the work they are doing. It is disgraceful to think that these men are being paid twopence halfpenny an hour while farmers pay one shilling and fourpence for their work. We can never get good work out of these men if we are paying them in a disgraceful fashion which makes them slaves. We should educate them in the fairness of British traditions, and not give them the impression that we are keeping them as slaves after two years. Let my hon. Friend tell us that we are going to pay these men, not give them slave rates. 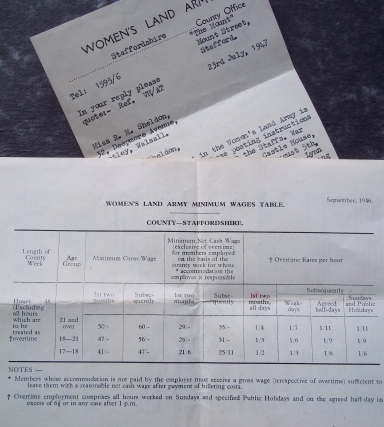 The letter from Phyllis Chapman, county secretary of the WLA, confirming my mother’s placement in Lynn Lane, accompanied by her terms of employment including the modest wages she could expect to receive.

Mr Baldwin was active in the National Farmers Union, and may well have been as outraged by the “profit” on the prisoners’ labour which was being kept from the farmers by the government – a practice perhaps not confined to the employment of prisoners and displaced persons.  My mother, at just 17 years old, having joined the Women’s Land Army, also arrived in Lynn Lane in the summer of ’47, ready to work on the land, and under conditions which resembled, in some respects, those of the German prisoners.  As a trainee, and living-in (in the WLA hut in Lynn Lane) she was paid just 21 shillings and sixpence for her 48 hour week’s work – the princely sum of 5 and a half old pence per hour.  Under the supervision of the hut Warden, Mrs Brand, she and her colleagues were also accountable for their movements whilst not engaged in agricultural labour!

By the autumn of 1947 my mother was being courted by my father, and began straying just a couple of fields away from the hut in her leisure hours, to spend some time with her future brother and sister-in-law at the Owletts. She remembers Gerry Alfred as the first German prisoner she had ever encountered, and confesses to having been afraid of him, and not a little startled when she passed the open door of the outbuilding which was his billet on the farm, and came across him scrubbing his back, deep in a hip-bath of water, singing loudly in German. We can conclude that Mrs Brand kept her girls’ work parties well away from the Prisoners of War on the local farms.

Gerry Alfred didn’t want to leave Staffordshire when the time came for him to be repatriated.  His home was now in the Russian sector, and the Soviets’  treatment of the prisoners they had taken during the war was already notorious.  His apprehension about returning to Germany was probably very well founded, but it had been decided that repatriation should be completed by the end of 1948.  British men needed their jobs back now.

Rosalind’s account of the last time she saw him suggests that he was reconciled to his fate:

……it’s one of my earliest memories, seeing Gerry Alfred with his kitbag and an army lorry pulling into the yard with flapping canvas sides and men in the back singing and stamping their feet, leaning down to give him a hand up, everybody so happy, and me peeved that he was so keen to leave us.