A long way from the seaside….thankfully 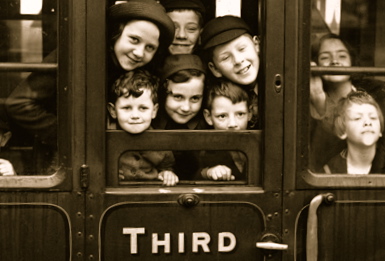 Whatever aspect of recent social history you research it is, by the nature of things, always just in time for something, and just, tantalisingly, too late for something else. Where have you so recently vanished to, Audrey Blackford, lifelong spinster and resident of Margate, except for the two memorable years of your life spent near the village of Shenstone in Staffordshire? What have you to say about your experiences there?  Who was “Dorothy?”

It is timely that Staffordshire County Council have created their “Children on the move,” project – a book and set of educational resources to preserve the memories of those involved in war-time evacuations of young people to Staffordshire. To have any direct memories of the time at all, you now need to be well into your seventies. Colton, Hints, Burton, and Rugeley are mentioned.  Shenstone, which received two separate waves of young guests, does not yet feature.

The villagers of Shenstone were, like most of their countrymen, primed and ready for the fight against Nazi Germany in the late summer of 1939.

My Aunt Mary was a vigorous and vivacious young woman of 26, just a couple of years into her married life, and living in the Owlett’s Lodge at the end of the drive leading to the farm still occupied by her husband’s parents, before it was requisitioned to do its part for its country. Plans to evacuate children from the Midlands’ industrial heartlands, which were sure to be the enemy’s target, to the surrounding rural Shires, were very promptly put into action as war was declared on September 1st. “A train load of children from Birmingham arrived at the village station.” Aunt Mary wrote.  “Those housewives closest were able to pick their children.  I was last on the list of volunteers, and there remained three boys to be housed.  I could not refuse to have them.” They had hardly arrived back at the young Mr. and Mrs. Cooper’s nice little single-storey cottage when it was clear that the arrangement was not to the visitors’ satisfaction.

“They arrived in the dark, in a mood.  Not one wanted to be in the country.  They wanted to be back among the houses.  They did not like being away from familiar things and said they wanted to go home.  Next morning they all, including those in various homes in the village [of Shenstone] wanted home.  They all went, leaving us all wondering why did we have children from less than 18 miles away?  Those in charge of arranging such things should have realised we lived too close to Birmingham.”

One can only imagine the defiant, boot scuffing, sullen exodus back to Shenstone station down the blackberry jewelled late summer lanes, away from the unsatisfactory, rustic hospitality.

Next time, the authorities would not make the mistake of evacuating civilians such a short distance away from their homes, but for now, it hardly seemed necessary to persevere with the operation.  Christmas 1939 came and went, and new evacuees all over the country made their way back home.  Winter faded into spring and still no dramatic action seemed to be occurring in Western Europe during what came to be referred to as the “Phoney War.”

It was in May 1940 that anxiety levels rose again.  The British population listened with horror to wireless broadcasts that described how Hitler’s forces were advancing towards them across the continent.  By May 26th, Calais had fallen to Germany, and invasion seemed possible if not likely.

A hazy image of Keepers Cottage from Owletts in the 1940s

Grandad Horton cultivating vegetables at Keepers Cottage in the late 1940s, once more confident that his family would benefit from the fruits of his labours.

Across the fields from the Owletts Farm, at Keepers Cottage, on Footherly Lane, Mary Cooper’s youngest brother, Ted Horton, (my dad) was helping their father plant that spring’s chitted seed potatoes. That little vignette seemed to sum up the family’s deep connection to their little acre that was so outrageously under threat and was seared into my father’s memory.  The older man had sighed, and wondered, philosophically, whether the family would still be there on their well-worked smallholding later that year, to benefit from the crop.

On the East Kent Coast, now facing occupied territory only 22 miles across the channel, the danger from enemy action was more immediate and obvious. John Betjeman saw the vulnerability of the quintessential English seaside resort of Margate as a poignant symbol of all that was in danger of being lost. As he wrote in his poem “Margate 1940:”

“Now dark is the terrace, a storm-battered stretch;

And I think, as the fairy-lit sights I recall,

It is those we are fighting for, foremost of all. ”

Along with about 80 other contemporaries at Trinity Junior School in Margate, young Audrey Thelma Bessie Blackford made the journey north, and about as far inland as you could get, to the rural villages around Lichfield in Staffordshire on June 2nd 1940. It was thought such a significant influx of people that the local newspaper, Lichfield Mercury began a special “News from Margate” column to keep the evacuees in touch with events in their home town.  The billet officer’s record, part of a small bundle stored at the Lichfield Record Office details Audrey’s placement with the Cooper family, Owletts Lodge, Shenstone, too far from her home at number 7, Crescent Road, Margate, for her to return on a whim should the accommodation not prove to her liking. Luckily, the arrangement was a happy one, and Audrey stayed in friendly communication with her host family for seven decades after she returned home to Margate.  A worrying silence has only recently fallen. 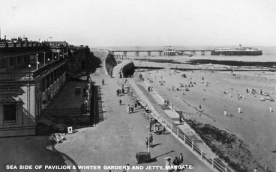 As Audrey and her little brother Alan parted from their anxious mother in Margate, the little town prepared to receive a great many arrivals. Of the third of a million troops evacuated from Dunkirk and its beaches that very week, over 46,000  reached land with relief at Margate jetty.  They were given tea and consoling conversation in the Winter Gardens, only a very short stroll around the bay from Crescent Road.  These despondent hoards must have been an alarming and depressing sight for the Blackford family.

View of Owletts Hall Farm in the 1940s, down the tree lined drive to the Lodge on Lynn Lane. How did my dad take this photo?

Aunt Mary’s 27th birthday had fallen on Saturday June 1st 1940, but it is unlikely that the routine of a busy farmer’s wife had been interrupted for any celebrations.  Neither was Sunday 2nd a day of rest, as she tripped down Lynn Lane onto the station platform once more, willing and ready to receive her young guests, but no doubt apprehensive about who might be billeted upon her this time. Initial indications were good:

“The next arrivals at the village station were from a different world, chatty, friendly and prepared. My allocation: two nice girls about 12 and a half years. They quickly established their priorities… Audrey the door side of the bed. “

It soon became clear that the two girls had differing  attitudes to life in the one spare bedroom the Coopers had in the little Lodge.

“Audrey was very interested in everything, quickly settled into country life. Dorothy at first appeared to be shy.”

Whilst boys might be more useful when there were heavy chores to be undertaken, it was generally accepted that girls were favoured as likely to be less intrusive and more biddable guests in the home.  Sadly, this was not the case with Dorothy:

“….she wanted everything done for her and hung about, showing not the slightest interest in her surroundings. Dorothy was a problem; she preferred to walk the mile into the village to stay with her other friends. After a few weeks her mother came over from Margate and was none too pleased when I could not put her up and she had to find someone with a spare room in the village. She returned to our cottage and said she was taking her daughter to live in the village.”

“Next day I had a telegram from Audrey’s Mum saying she was coming up to see her children. Audrey had a brother someone else had taken  – he was 7. Mrs. Blackford was a plump dark haired motherly kind of woman, about 5 ‘6″ tall. [Back at the station] Mother and daughter greeted each other, and a smiling Audrey introduced us:

We looked at each other and shook hands. The serious look disappeared; she began to smile, as we began the mile long walk to our cottage, a pleasant little house.

Mrs. Blackford sat down and was soon drinking a cup of tea. Her reason for the unexpected visit had been provided by Dorothy’s mother by telegram ” Mrs. Cooper is not the woman we thought she was. “… ” No. Her daughter did not fit in. Audrey will tell you that.”

Husband and I spent 3 most uncomfortable nights on a makeshift bed in the scullery giving up our bed to Mrs. Blackford, who stayed on to have her son transferred to live with his sister… aware that her daughter did have a very good billet indeed…. plenty of eggs and well away from the bombers targets. She went back to Margate knowing her children were safe and cared for.”

As far as was possible, yes.  But Shenstone was not immune to the effects of war:

“One night “our” searchlight [In the Owlett’s Orchard] caught a bomber on its way to Birmingham, followed him across the sky knowing that guns were trained on the bombers. Unfortunately another German bomber came up behind, dropped the bomb near the searchlight, putting them out.  We heard the bomb falling. It makes a peculiar sound, which gets louder until stopped by contact with the earth. A second’s silence then an almighty bang and blast which shook the cottage. Plaster began to fall but we could not put a light on to see the damage. There was a funny moment when Audrey said  ” The buggers have followed us here !!!!”. Next morning in the full light of day nothing was quite as bad as expected, we had just lost internal plaster. The big barn down at the farm was twisted, many of the corrugated sheets hung from the frame. The bomb had dropped about 300 yards from farm and searchlight creating a deep hole. It had landed on a very thick cable which carried the power to the searchlight. That was back in service by the time night came.

The bomber was stopped before it reached its target, the pilot bailed out.

The camp Naafi was partly wrecked and the soldiers took care of bottles of beer, sweets cigarettes etc. that managed to escape! One young soldier a new recruit from Erdington lost an arm and was invalided out of the army almost before he began.” 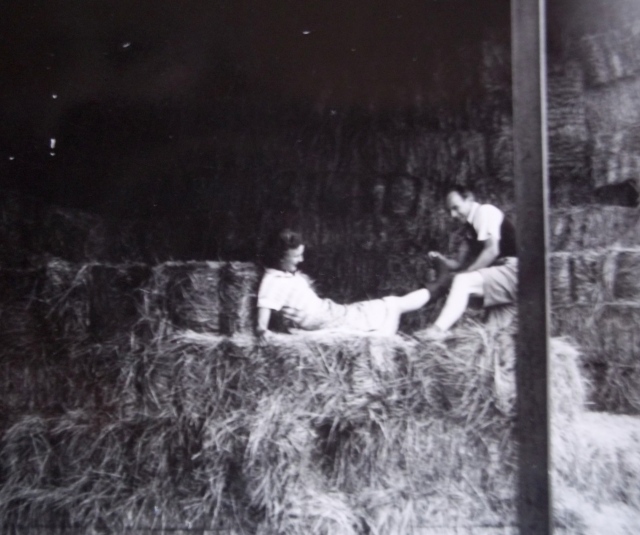 My mom and dad fooling in the Dutch barn at Owletts, just after the war, captured by Aunt Mary. Happy days after its traumatic night when the bomb dropped.

8 Responses to A long way from the seaside….thankfully