Posted on April 18, 2013 by staffordshirebred

Nipping through the bleeping, security protected doors of Maryvale Court, in Glebe Street, Caldmore, I regularly hurry past this inscribed foundation stone, always eager to see my Aunty Kathleen, who resides within, to reassure myself about the state of her health, and, of course, ask her some more about The Old Days.

The man who not only laid, but blessed this stone, Bishop Joseph Francis Cleary,  is just one of the very numerous Irish, Catholic immigrants who have walked this steep Staffordshire street in the last two hundred years. Kathleen and I share several of them as ancestors.  Our family included Egans and Noons, from the West of Ireland, who migrated in the hope of fleeing from poverty, and were not by any means as illustrious as Joseph Francis Cleary.  Trained at Oscott, he served as a parish priest in Wolverhampton. In 1965, the Catholic Herald described a splendid ceremony at St Chad’s Catholic Cathedral in Birmingham at his ordination as bishop, witnessed by his proud mother, who had made the long journey from their native Dublin for the occasion.  No episcopal seat being vacant which Joseph might occupy, he was made an auxiliary Bishop of Birmingham, and consecrated Bishop of Cresima – a titular bishopric of an area in modern Tunisia, with a congregation of negligible number, and deemed by the Catholic church to be “in the regions of the infidels.”  – more so than Birmingham, at any rate.

The marriage certificate of Elsie May Day and Edward Sheldon, joined in what was to be 39 years of devoted matrimony by Canon Yeo.

The ground to build this sheltered housing complex, with elderly members of the Catholic community of Walsall in mind, was secured by Canon Peter Taylor during the 1970s.  The mysterious, sizeable, solid,  man-made mound of soil rising up towards the east of the empty site did not deter him in the slightest from his choice. After all, it is a convenient short stroll from the beautiful Romanesque edifice which is St Mary’s the Mount Catholic Church and its presbytery. Many of the future residents of Maryvale would have attended services there throughout their lives.  Some might well have been educated at the school which used to stand on the steep slope to its rear.  My grandparents had moved to Bentley from the Sheldon family home in Queen Street when their children began to arrive and so for my mother, her sisters, and brother, devotion and education took place in the neighbouring Catholic parish of St Patrick’s. However their parents, my staunchly Catholic grandfather, Edward Sheldon, and his biddable and sweet natured bride, Elsie May Day, had been married within the sumptuous azure and gold  interior of St Mary’s on the 23rd of March 1924. As a boy in the 1900’s my grandfather had attended school at St Mary’s with his friend John Carless, V.C., whose delightful niece lives opposite my Aunty at Maryvale.

This pleasing building is one of the earliest post-Reformation Roman Catholic churches in the country: designed by Joseph Ireland, it was completed in 1827, which is, notably, 2 years before the Catholic Emancipation Act which removed civil restrictions on Roman Catholics in Britain, including those against purchasing land. Perhaps its early arrival was a result of keen demand in the area: in addition to the English Catholics who had stubbornly persisted in practicing their outlawed faith covertly, there began, in the 19th century, the influx of Irish migrants, who brought their religious practices with them. Perceptibly “foreign”, sometimes shabbily dressed, they were drawn in number to the church services whose Latin words were exactly those they had learnt by heart from infancy, as much from homesickness as faith. Even in recent years, my Aunty tells me, that the concerned Irish Mammy of a fugitive son would contact, by numerous, falteringly penned letters, the Catholic churches in the area she suspected he was working.  It was inevitable that however delinquent, he would be drawn into them at some point to hear the comfortingly familiar liturgy. 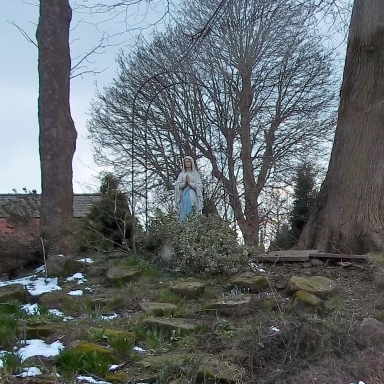 What, then, became of the longstanding, large lump of earth and stones on the Church’s newly acquired building plot on the corner of Glebe Street and Caldmore Road? The architects seem to have worked the building around it, and it is incorporated into the communal garden at the heart of Maryvale Court.

A seat in the sunny conservatory affords a good view of the mound, and it is topped, like a bun with a pious cherry, by a statue of the Virgin Mary.  Is it in my imagination, or might Our Lady have a Mona Lisa hint of a satisfied smile playing about her prayerful lips?

The history of an area, even when its old buildings are gone, can often be traced by reference to the enduring names of its streets.  “Mount Street,” running parallel with “Glebe Street” might seem self explanatory as this end of Caldmore is indeed on an elevated bit of terrain.  But why is the church called “St Mary the Mount” – perhaps because The Mount was situated alongside what is now Wednesbury Road but north of Glebe Street, and was a large house, used for many years as a boarding school run by the ladies of the Richmond family, and which the Walsall Hospital Committee – galvanised by Sister Dora, purchased in 1867 to serve as Walsall’s first proper hospital.

Beautiful, kind, Sister Edith and her team, now care for Maryvale Court on the former site of Walsall Vicarage. Their order of nuns was founded by Bishop Godfrey Okoye in 1969 in Nigeria, in response to the need to help a population ravaged by the Nigeria-Biafra war. They must sometimes feel a long way from home in Walsall, apart from the worldwide connection of their faith.

The “Glebe” of Glebe Street indicates that lands hereabouts were allocated to the Anglican parish priest of St Matthews to provide his income.   “Vicarage Place,” and “Vicarage Walk”, slicing between Maryvale and St Mary’s, reveal exactly what used to stand at the Caldmore Road end of Glebe Street.  In fact, the 1901 Ordnance Survey map reveals that the portion of Caldmore Road north of Glebe Street was then called “Vicarage Road.” Scrutinising the ground plan, it is possible to make out that when enjoying a comfortable seat in Maryvale’s conservatory you might be sitting in the very spot where the Vicar’s bow-windowed parlour jutted into his ferny garden.

It seems that even prior to taking up his appointment in the 1830’s, and having to move in his family and servants, cheek by jowl with the Papists of the district, the Reverend George Fisk was known as a “firebrand” preacher, whose enlivening sermons, drawing huge congregations,  often contained lengthy anti-Roman diatribes.  His clashes with Father Francis Martyn, the first priest at St Mary’s were even played out in the local press. In the Staffordshire Advertiser of 16th June 1838, Father Martyn accuses the Reverend Fisk of describing a Catholic Chapel as enchanted ground, under the spell of Satan, whilst Reverend Fisk suggests that Father Martyn has attempted to earn respect amongst unsuspecting and generous Protestants….by your urbanity and courtesy. A fearful thought, indeed, that seductive continental wiles might tempt the denizens of the town from their joyless low church paths. What would Dr. Fisk make, I wonder, of the smiling, darkly handsome new occupants of the presbytery in 2013, Father Salvatore, and his Italian brethren?

How then could George Fisk bear to view the procession of the faithful to Father Martyn’s masses, in plain sight of his window?  And what could he do about it but build an extraordinarily large garden rockery in the Vicarage grounds, to provide him with a more pleasing panorama?

So when, on September 8th, 1982, the Right Reverend Joseph Cleary laid the foundation stone to Maryvale Court, “Spite Hill” was as yet unobscured by the new building. Those in the know at the ceremony undoubtedly allowed themselves a victorious chuckle at the expense of the Reverend Fisk, and vowed to preserve, for posterity, the little mount of The Mount, “Spite Hill”

Without the inscription, what casual observer would remember anything of the events of September 8th 1982?  Well I would, because it was my 21st birthday, which I celebrated at le restaurant “L’Auchel”, above a bicycle shop in Walsall Wood Road,  Aldridge.