Memory at my bidding.

Posted on March 5, 2013 by staffordshirebred 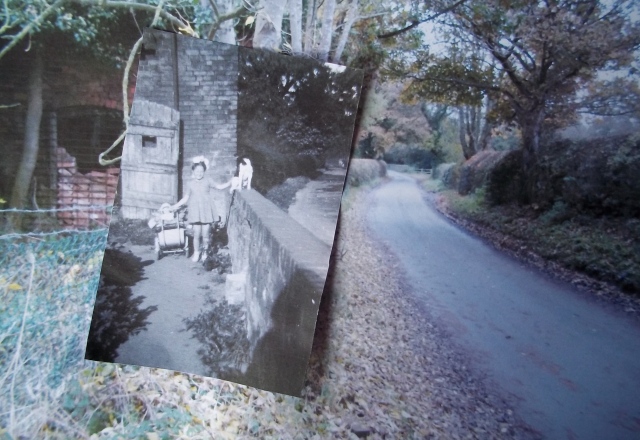 Over the years since my Uncle Bill’s death in 1982, I have regularly taken a less then necessary detour along Footherly Lane, and permitted myself intermittent wincing glances at Keepers Cottage.  Over the course of half a century, it was home to three generations of my family. Peering through the windows after it had been empty for eight or ten years, we could hardly believe that the tiny rooms could have accommodated the extended Horton family for Sunday Teas, and death-bed vigils, but they did, and with its extraordinary,  time-capsule characteristics –  the unspoilt rural setting, the well water, the paraffin lights, and the earth closet – the place assumed a mythological status in our imaginations, and still haunts me in dreams.

My inner eye has compiled a little flip-through book of images over the intervening, uninhabited, years of the little dwelling, its boundary wall, and its outbuildings, as they have sunk gradually, incrementally, to their rendered red brick knees onto the soft, loamy soil.  Windows are now bricked up and blind, and chimney pots long toppled. The field which comprised the small holding is overgrown. However, the wood and the stream by which it is bounded look much the same, and the precise curve of the lane down to the bridge over Footherly Brook is unchanged from the sunny August day in 1950 when my Dad took a snap of his niece, Josephine Anne, her refined, well dressed dolly, and Bob the dog.

It must come as some shock if you have the misfortune to suddenly revisit, after a long interval, a beloved building, now decayed, which you remember in its prime. Surveying the scene must be like viewing one of those ambiguous optical illusions; drawings which simultaneously depict, say, either and both a rabbit or a duck. Or Rubin’s vase whose outline is composed by the silhouettes of two faces in profile….images of which either one or the other can be seen at one time, so that the brain flips back and forth between the different perceptions. Or, is it always possible to be aware of the sharply defined picture, drawn from memory, superimposed upon the deficient and unreal dreariness of present facts?

Augmented reality technology will one day – soon – be able to mimic the natural phenomenon of seeing the landscape of your past as you plant your feet on today’s unforgiving ground. I discount the obvious application of  “A.T.” glasses or contact lenses feeding sat nav data seamlessly into your field of vision.   My thoughts rush to the possibility of enhancing my view of the 21st century streetscape of an historic city such as Lichfield by generating transparent images of now indiscernible thoroughfares  – or of buildings long demolished. And of populating them with shadowy animations of the denizens of the city going about their business as they would have looked 50, 100, or 1000 years ago? Wouldn’t that be winning way of engaging with history?

For now, I must be content with my own internally perceived web of visual recollections. Perhaps you experience them too? Walk up the comfortable incline of Greenhill from Lichfield’s commercial centre, turn left, and walk on between the townhouses, a happy melding of old and new, which have been christened “Greenhill Mews.” At the end, are you ever still arrested by the sight of the undulating roofline of the “new” Tesco superstore, which opened in 2009, having seen, in your mind’s eye, the “older” store, a mere 10 years its senior? There was no windowless booth of a “Costa Coffee” in the earlier, squarer, edifice. To the left of the main doors was a spacious and convenient café. In there, my parents and I raised celebratory hot beverages after a property auction sale in the – also now long gone – Lichfield Civic Hall. Winterton and Sons’ gavel had fallen in my favour, and our future marital home, our very own Keepers Cottage, had been “knocked down” to me. 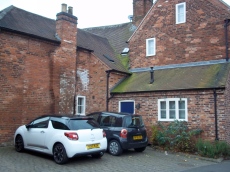 And speaking of auction sales, can you, like me, picture an even older incarnation of this elevated acre of Lichfield, recalled in the name of the street called “Smithfield Rise”, on the north-west side of the Tesco store? Until the site off Church Street was cleared to make way for the supermarket in 1988, Winterton and Sons, auctioneers, operated, as their family had done for over a century, the busy Lichfield “Smithfield”, or livestock market, there. The Victoria County History of Stafford tells us that:

in 1883 Thomas Winterton began building a covered market in Church Street. There was a street market for horses once a month by 1879, and it was evidently still held in 1889. By then the smithfields were selling cheese, poultry, bacon, and potatoes, to the detriment of the general Friday market. An annual wool sale was started at the Greenhill smithfield in 1884 with some 4,000 fleeces advertised, and by 1892 some 32,000 were pitched there. In 1927 the Church Street smithfield dealt in cattle, sheep, pigs, wool, and potatoes on alternate Mondays and in horses on the first Friday of the month. A livestock market was held there every Monday from 1935.

The old walls, which have been incorporated so congruently into the dwellings which form Greenhill Mews, I knew in the 1970s as part of the buildings which housed the stock on Monday market days. Thrillingly, every fourth or fifth Thursday, the ridged and gullied concrete was scrubbed and sluiced even more vigorously than usual, and,  in the stalls, ponderous examples of Victorian furniture jostled for space with pictures,  sets of books tied with string, baskets of china, and the mysterious and most desirable boxes of “miscellaneous items”, which were sure to contain a priceless treasure in their dusty nether reaches.

Attending the sales held much excitement for me.  Michael Winterton, attractive, charismatic, acerbically witty, was wheeled, by minions, on his platform around the lots.  He winked at the girls, and humiliated, with cutting remarks, whoever had amateurishly waved or gestured within his field of vision and yet had not intended to make a bid.  How pleasurably my heart pounded when I first secured a lot by bidding for it myself, handed over my pocket money to the clerk, and took home my prize. The risk!  The drama! The smell and glory of being freely able to handle and inspect the time worn chattels of another man’s household!

Auction-going then was a minority sport.  “Flog it!” was decades from being aired on TV screens.  Even “Going for a Song,” the only, po-faced, antique TV programme of the day, had yet to be superseded by “Antiques Roadshow”.  Items which would effortlessly slip into the  Art and Antiques category of EBay today were as yet not even “Collectables” –  mostly just someone else’s junk, but endlessly fascinating to me!  “That’s a dealer,” my dad might say to me, indicating with his eyes, but without moving his head, some eccentric looking person who might have been Colonel Mustard or Miss Scarlett. I was a rapt observer of this arcane world, in which I felt I belonged.  The porters, in their matt brown cotton coats lifted their eyes and greeted my dad by name: “Worro, Ted.” “Worro.” “Worro.” 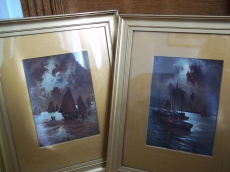 My father bought these rather gloomy, continental looking seascapes at the Wychnor Hall sale in 1976, having been outbid on some Stevengraphs which he fancied better.

If the contents of a larger house were to be auctioned, the auctioneers would decamp to the site.  Mohammed would go to the Mountain. An enormous marquee was erected on the lawn of Wychnor Hall, in that long hot summer of 1976, where the copious contents of the building were sold off during two days, following the death the previous year of its gentleman owner of 30 years, William Harrison, the scion of industrialists, inheritor of their wealth, but father of daughters only.

The River Trent babbled refreshingly at the foot of the gardens, but it was humid in the marquee.  It seems audacious of us now, but Mom, Dad and I snook into the cooler interior of the Hall, and found it to be deserted.  Having started the job, we finished it, and the memory has never left me of climbing ever narrower stairs to the top floor, where we peeped into an abandoned nursery containing a shabby rocking horse with a mangy mane draped in spiders’ webs. 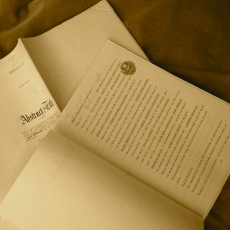 The document, signed by Mr Harrison’s heirs, conferring the right of tenure on his gamekeeper, Mr Johnson, and his wife, in 1976.

When his boss died, William Harrison’s Gamekeeper, Harold Johnson, was forced into an early retirement.  His service, rearing wild game, preserving the hedgerows and copses of their habitat, and organising shooting days for Mr Harrison and his aristocratic guests, had begun not long after the days when the Harrisons were tenants of Orgreave Hall, on the south bank of the river, and it was in Orgreave that he had remained living in his tied cottage. In accordance with Mr Harrison’s wishes, a legal document was raised in April 1976 to confer on the Johnsons the right to reside in the Keepers Cottage for just as long as they wished.  In fact, that was to be until 1991, with Harold dead, and Ivy ready to move into sheltered accommodation, precipitating that sale at the Civic Hall at which I was the successful bidder. 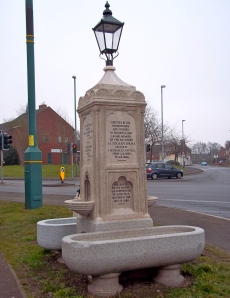 What is there to remember the Greenhill Smithfield by now?  Well, the Serjeantson Fountain, built by public subscription as a memorial to the Reverend James Jordan Serjeantson, 19th century rector of St Michael’s Church has been restored and repositioned in Greenhill. It sports capacious stone troughs for the refreshment of the livestock which would be arriving in Lichfield from the surrounding countryside each Monday for the auction sales.

At the Tesco end of Greenhill Mews is “The Formation of Poetry,” by Lichfield born sculptor Peter Walker, which was unveiled in September 2010.  It is a dramatic tribute to the life and work of Samuel Johnson, in the form of an animated dictionary from which choice pages are cascading away. The title of the work refers to Johnson’s method of using poetical quotations to establish the meaning of words. These include “Sleep,” ; “Walk”; “Moon,” “Cloud,” and “Rose”, with supporting quotations from verse.  “Worro,” does not appear in the famous dictionary, although it is a word which must surely have been heard in the Lichfield of Johnson’s  youth. I have a hunch that it, like its upper class relative, “What Ho!”, can be traced back to the earliest of English poetical sources……..

Begins “Beowolf.” – (Lo! We have heard of the might in days of yore of the Spear Danes, kings of the people).  Hwaet! The bard says, as he hails his fellows in the vast smoky hall and calls attention to the fact that his recitation is beginning.
“Worro,” Jeeves!
“What Ho, Aynuck!” 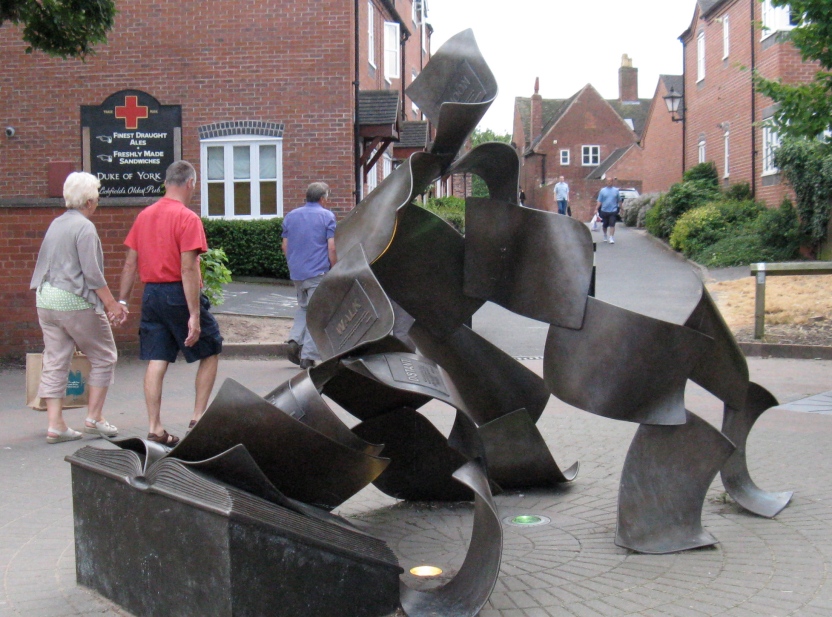 7 Responses to Memory at my bidding.

Leave a Reply to Nigel I Johnson Cancel reply