The McGonagall of Gaia Lane

Posted on March 12, 2013 by staffordshirebred 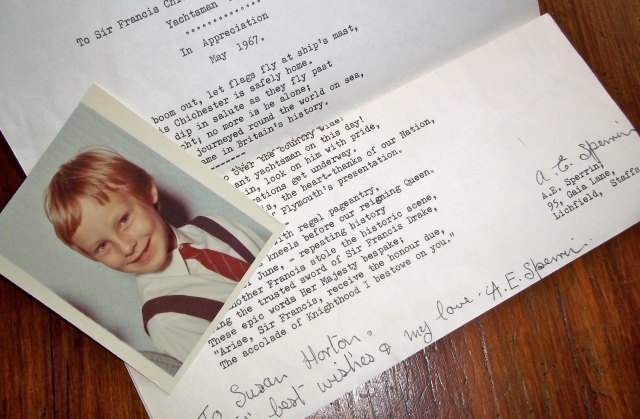 There were several months of speculation before a new Poet Laureate was appointed in 1972, following the death of the incumbent, Cecil Day-Lewis.  With unemployment reaching a record one million, and the S.A.L.T. agreement finally being signed by the Russian and US presidents, I imagine that the Prime Minister, Edward Heath, thought he had more to worry about that summer than whose name he would be submitting to the Queen as Day-Lewis’s successor. 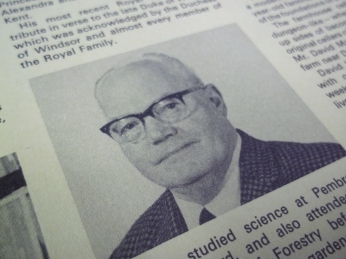 A short piece about Albert Sperrin, “Royal” Poet, appeared in the Lichfield and Tamworth Magazine in September 1972.

According to the Lichfield and Tamworth Magazine, at his home at 95, Gaia Lane, Lichfield, a hopeful candidate for the newly vacant position was relying on the advocacy of no less a figure than Earl Mountbatten of Burma to promote his cause. The eventful life of the minor Royal, Admiral of the Fleet and last Viceroy of India had recently inspired a lengthy verse narrative to be penned in this neat, turn-of-the-century, semi-detached cottage near Stowe Pool by productive wordsmith Albert Edward Sperrin, who lived there with his wife, Jessie.

Self styled “Poet for Royal Occassions,” Albert Sperrin, had received over 50 letters of acknowledgement from the Queen Mother, Duke of Edinburgh, Prince Charles and Princess Margaret, among others, according to the September 1972 edition of the local magazine. Even the black sheep of the Royal Family, the Duke of Windsor, had been the subject of one of Sperrin’s poetic tributes following his demise that May, for which his widow, the former Mrs. Wallis Simpson, was said to be grateful. Public events of all kinds had been marked by Mr Sperrin’s enthusiastic lyrical endeavours since the 1930s. Meanwhile, he had kept body and soul together by virtue of his day-job as Superintendent of Hospital Gardens, first in his native county of Oxfordshire, later in Birmingham and also his adopted city of Lichfield. He was proud to relate that like Doctor Samuel Johnson, Lichfield’s other famous man of letters, the young Albert had attended Pembroke College, Oxford. In parallel with Johnson, he, too, had been obliged to leave without attaining a degree because of a shortfall in the family finances.

My dad had an eclectic portfolio of customers for his domestic building skills in and around Lichfield, and Mr. Sperrin looks likely to have been one of them. Why else do I have in my possession a copy of his snappily titled opus ” To Sir Francis Chichester, Britain’s lone around the World Yachtsman and Flier. In Appreciation May 1967″, annotated with a warm and personal dedication to me by the poet? Ted Horton formed easy, chatty, friendships with most of the people he worked for, and during tea-break conversations in his brown bib and braces, checked shirt, and narrow, woollen tie, there were inevitable references to me. Me, his daughter and only child, who at the age of six, already showed tedious signs of being “wordy”, and so would have genuinely appreciated the personalised draft of “To Sir Francis Chichester…et cetera.” 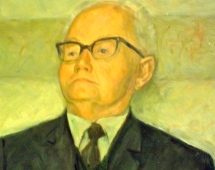 We now know that, in the event, the honour of Laureate was conferred upon Sir John Betjeman on the 10th of October 1972, and that the aspirant speculation of the Lichfield and Tamworth Magazine was futile. But there are more ways than one for a poet to acquire posthumous fame. It came to light after Albert Sperrin’s death on Valentine’s Day in 1987 that he had bequeathed to Lichfield City Council a portrait of himself in oils. Years later, details of the portrait, by artist “J. Buchanan” made it to the list which the Public Catalogue Foundation compiled of publicly owned art. In collaboration with the BBC, the database is now available online, so that by making a Google search of albert+sperrin+poet you are rewarded within seconds by the view of a round, bespectacled face, and, additionally, the opportunity to read the verse which Sperrin composed to mark the Mexico Olympic Games in 1968.

Mrs. Jo Wilson, the curator of the Samuel Johnson Museum in Lichfield was kind enough to retrieve Albert’s picture from the archive for my perusal. She commented that the relaxed, informal pose of the sitter intimated that the artist, J.Buchanan and his subject were personal friends. The composition of the picture, with Mr Sperrin sitting comfortably in his armchair with a patterned sofa partially visible in an awkward position to the rear suggests to me that we are privileged to be looking at the interior of 95, Gaia Lane.

The portrait seems to have gone on public exhibition in Lichfield in 1987, accompanied by some of his letters and manuscripts.  A short biography written to accompany it reinforces the impression of a good hearted, traditional British eccentric, a “generous man always ready to write a poem for a good cause.” His subject matter ranged from Royal events to the Bradford Football Ground fire, and the artistry of Torville and Dean. His is described as an “idiosyncratic’ style,  which charmed and delighted local people – which I am sure is a fair description.  Touchingly patriotic, Albert Sperrin’s work is part of a long tradition of versifying about events of national importance, which goes back to a time before mass media or widespread literacy when reading rhyming accounts out loud was a useful way of communicating news.

Faults in meter and stress, and some instances of oddly archaic language are easily overlooked when Sperrin’s writing has such brio. Haven’t the devoted fans of William Topaz McGonagall, guilty of far more brutal shoe-horning of words into lines remained faithful and evangelistic over 100 years after his death?  ( He died 6 months before Sperrin was born – although it is said that Sperrin met Rudyard Kipling in his youth, who encouraged him in his writing)

Like Sperrin, McGonagall sought Royal patronage for his efforts. He dubbed himself “The Queen’s Poet,” and walked 60 miles to Balmoral in a violent storm to present a performance of his work to her.  He did not meet with success either, and received no accolade from his monarch.

But how bad a Poet Laureate might Albert Sperrin have made?  Sir John Betjeman, the successful candidate, did not enjoy the job, and, according to a press report of the time received news of his appointment with luke-warm enthusiasm:

Sir John Betjeman will write only when moved, and otherwise “remain a silent thrush.” said the Guardian on the 11th October 1972. It went on:

He asked yesterday, on holiday at a cottage in North Cornwall: “Isn’t that a beautiful remark? I just made it up. Poetry is poetry, whether you are Poet Laureate or not. It has to be felt. I don’t think I shall write about public occasions unless I can feel them, it is better not to write than to write badly.”

Our local bard would have displayed no such reluctance, I feel sure.

To Sir Francis Chichester, Britain’s lone around the World Yatchtsman and Flier – by A.E.Sperrin

Let planes dip in salute as they fly past

Over his yacht; no more is he alone;

This man who journeyed round the world on sea,

Marking his name in Britain’s history.

This flying ace, this ocean pioneer

Undaunted by mishaps, unmoved by fear,

A man of courage, an adventurer;

Alone, but for his Gipsy Moth for company.

Around the world he flew, always alone

The sea and land below, the sky above

The cockpit of his aeroplane his throne

The Gipsy Moth he flew in, his air-love;

With Gipsy Moth the Fourth as his steed.

Sailing upon the ocean, his untiring slave,

Willing at his command to give more speed:

White sails at her mast-head, billowing in the breeze,

Gliding her along o’er the windswept seas.

Alone around the world he rode the seas,

Through dreary days and nights for weeks on end.

Into the unknown, lashed by the wild sea breeze,

Enduring loneliness without a friend

The sun and stars above his visual guide,

The yacht he rode with his love and pride.

Stately she rode her Captain standing by

Crossing the Atlantic Ocean on her way.

Speeding along, her main-sail flying high

Nearer her destinations day by day.

Alone, the Captain and his sea-worthy friend

Together, yacht and man rounding the Horn

Tossed upon mighty waves, then lost beneath the spray.

Was ever there a braver yachtsman born?

Or yet a yacht which gave such staunch display?

High on a sea-borne mountain, then tossed below,

Into the boiling ocean, backwards, to and fro.

Salute this hero over the country wide!

Salute this gallant yachtsman on this day!

Citizens of Britain, look on him with pride,

As Plymouth celebrations get underway.

Receive, Sir Francis, the hear-thanks of our Nation

And the statuette of Plymouth’s presentation.

The scene is set with regal pageantry,

As Sir Francis kneels before our reigning Queen.

This day of June, -repeating history

When another Francis stole the historic scene,

These epic words Her Majesty bespake;

The accolade of Knighthood I bestowe on you.”

6 Responses to The McGonagall of Gaia Lane