Faces in the Flames

Posted on November 27, 2012 by staffordshirebred 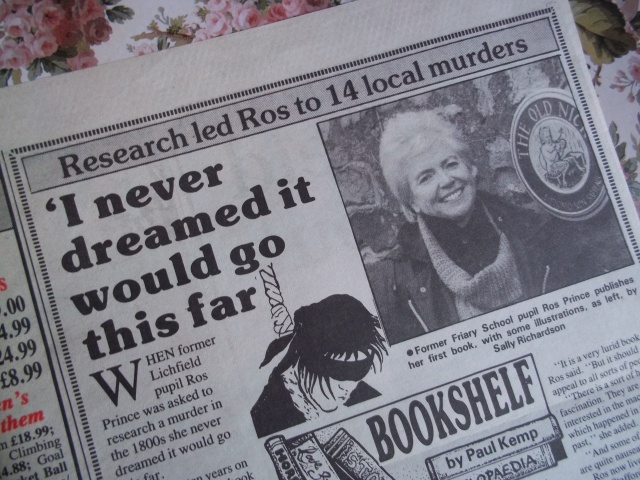 The Lichfield Mercury featured Ros and her books. At that time The Librarian of Cheadle and Blyth Bridge libraries, Ros has had several volumes published on the subjects of Staffordshire Crimes, Curiosities, and Castles.

It is a universal human tendency to see meaningful patterns in this life of cruel randomness. If we are lucky enough to spend a winter’s evening sitting in front of an open fire, we see faces in the flames.

Most people “believe” in meaningful co-incidence.

On rational reflection, it is no co-incidence at all that I should have happily lived my married life in a little old brick house with a big garden in the Staffordshire countryside that goes by the name of “Keeper’s Cottage”.  It was fortunate that at a timely moment, the widow of Mr Harrison’s last Gamekeeper had decided that the day had come when she would prefer the convenience of village life, and that the Trustees of the Wychnor Estate elected to auction off this small part of their property which thus became empty.  It seems almost inevitable when its photo appeared in Winterton’s advertisement that the sisterly resemblance of this cottage to pretty, if primitive, Keepers Cottage,  Footherly, where my Dad was brought up, would attract my parents’ attention, and lead to Ken and I buying it.

Less predictable was that when we told my cousin Rosalind that we would be living in this place called “Orgreave”, she said knew this very  spot most intimately, having just completed research here for her forthcoming book! Her reaction made a refreshing change, back in 1991, from having to inform someone – “No not that Orgreave,” and sigh, as conversation turned to heated political debate.

“Capital Crimes – Staffordshire Hanging Offences” included a chapter about a dramatic and dastardly double murder which took place only a score of yards from our front gate, just less than a century prior to our arrival in this small, sleepy, Staffordshire community.

We had wondered why even the internal bedroom doors in our cottage sported such hefty Victorian bolts on their interiors – and the heavy planked oak back door can be additionally secured with a bar threaded through fastenings on either side of the jamb.

Now that we knew, we were interested and somewhat  excited – not emotions you would imagine that we would share with our predecessors in the area in the days following the fateful morning of 31st May 1895, but the reporter sent from the Tamworth Herald only the following week relates the news with a barely suppressed air of delight:

“On Friday morning last, in the tiny hamlet of Orgreave, in the Trent Valley, about a mile and a half from Alrewas, was committed, as reported in last week’s Herald one of those awful crimes which come once in a generation or two to thrill the whole of a quiet country side, and furnish a tale of horror for many years to come.”

In short, an armed man had approached a cottage in the hamlet at about 9 o’clock in the morning, and shot through the heart one George Hackett, who in one press account was washing himself outside the back door.  George’s stepfather, Mr. Frederick Bakewell was sitting at the table taking his breakfast, and was fatally shot through the back.  Mrs. Bakewell was shot at twice but survived.  As she undressed for bed that night, no doubt already in a terrible state of shock and grief, a bullet fell to the floor.  It had been embedded in her elaborate underclothing.  As Ros put it in her chapter’s title, Sarah Bakewell owed her life to a “Stay of Execution”.

“Capital Crimes”by Ros Prince (nee Cooper) includes a comprehensive, well researched report of the criminal career, capture, trial, and execution of Thomas Bond for the double murder at Orgreave in 1895.

Until June 14th, when the perpetrator, Thomas Bond was arrested, there was rumour, speculation, and abortive arrests were made.  Amongst other suspects were an unfortunate “imbecile”, and someone whose only crime proved to be that he was “a Frenchman”.  The Tamworth Herald reporter relished describing the atmosphere in the district during this fevered fortnight, which may have led to the speedy installation of the extra ironmongery on our doors:

“The tragedy has caused great excitement in Lichfield and Tamworth and in some of the villages near Alrewas, the inhabitants have been in a state of terror.  They have kept the doors of their houses locked and when anyone has knocked they have refused to answer it without having first satisfied themselves as the the character of the enquirer by going upstairs and looking out of the bedroom window.”

The cottage in question no longer stands, but is described in detail in contemporary newspaper reports, as every detail of the circumstances surrounding the murders was being pored over eagerly by readers:

“The kitchen in which the murders were committed is the only living room, and is a large and comfortable apartment.  It opens into a small grocer’s shop, to which entrance is gained by a door which abuts on the lane in front.  It is a picturesque cottage in a very pretty spot, and windows of the upper rooms jut out through the sloping thatch about.”

Mrs Bakewell had been born as Sarah Gaunt in the nearby village of Hammerwich.  She married John Hackett of Orgreave in 1857, becoming a member of a family which had remained numerous in the immediate area for many decades. John and Sarah had a family of six children, and when he died in 1878, she stayed on in the family cottage, making a living by running a grocery business from the premises.  Meanwhile, Frederick Bakewell, an Orgreave man by birth, had lived in Norton Road, Pelsall, and worked as a plate-layer. His wife Sarah Dolman, from an established Alrewas family, had died in 1873 after bearing him at five children.  We presume that Frederick renewed connections with his birthplace in middle age, and married and moved in to the Orgreave cottage with the widow Sarah Hackett in his 56th year.

The cottage, its neighbours, and even a little chapel are remembered as ruins of their former selves in the 1930s by the oldest residents of present day Orgreave.   Around the Wychnor Estate, pairs of boxy 1960’s semi-detached dwellings for “tied hands”, welcomed enthusiastically in their day for their indoor plumbing and electric light, have been erected on the sites of tumbledown thatched cottages. Other accommodation, like the Bakewell/Hackett cottage, was not replaced because it was no longer required.  Like many rural villages, Orgreave’s population has vastly reduced over the last hundred years or so, as fewer and fewer man-hours are required to farm a given acreage. Nothing now is left of the “picturesque cottage” which saw so much blood pooling gruesomely on its kitchen floor, other than concentrations of broken masonry thrown up in certain patches each year by ploughing.  The site is a small unkempt field lying in front of  Orgreave Farm. 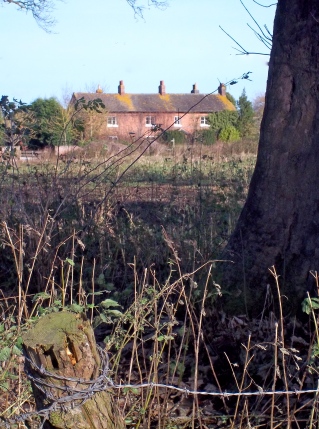 View across the site of the Bakewell/Hackett cottage in Orgreave to the upper windows of Orgreave Farmhouse, from which Mrs Barton watched Thomas Bond commit murder.

At the time of the murders in 1895, what is now known as Orgreave Farmhouse was inhabited by a Mr. Morris Piddocke Averill, noted in press reports to be a guardian of the Lichfield Union.  On the day of the murder, Mr Averill’s mother-in-law, Mrs Barton, watched the horrible drama unfold from the upstairs window of the house.  “Mr. Averill’s residence and grounds,” the Tamworth Herald explains, “are separated from Bakewell’s by the village roadway and a fine view is obtained of the country to the south and over Bakewell’s cottage.”  The view of events from what is now my own bedroom window would have been only slightly more obscure.

Frederick Bakewell and George Hackett were buried, side by side, in the graveyard of All Saints Church, Alrewas.

What is described in reports as the “village roadway” dividing Orgreave Farm from the cottage is in fact a very ancient track down which goods have passed for thousands of years.  On foot (or in dryer times, bicycle), it can still be followed all the way to Alrewas, and may have been the route down which some of the “large and sympathetic crowd” reached the funeral and burial of Frederick Bakewell and George Hackett at Alrewas Parish Church. “The proceedings,” we are told, “were very solemn and impressive”.  and that “The mourners consisted of relatives from Chesterfield, Donisthorpe, Pelsall, Bloxwich, Walsall, Kings Bromley and elsewhere”

On August 20th, Tommy Bond’s corpse was subject to a contrastingly ignominious interment within the precincts of  Stafford Gaol, following his trial, conviction and execution by hanging.

8 Responses to Faces in the Flames