Posted on June 6, 2012 by staffordshirebred

The final afternoon of Diamond Jubilee festivities begins in the village of Kings Bromley.  A member of Kings Bromley Historians is vigorously polishing brass plaques in the Village Hall, the larger of which reads:

“This Church Institute was erected by subscription, A.D. 1914, as a memorial to the Very Reverend Ernald Lane, D.D. , Dean of Rochester and sometime Archdeacon of Stoke on Trent”

Around and about this last minute housekeeping activity, scuttled a bevy of ladies of the Womens’ Institute, preparing to host an Afternoon Tea.  The doilied plates of scones and cupcakes presented themselves like colour illustrations from a vintage “Book of Baking” and each table was dressed with a hand embroidered cloth and a jam jar of artfully arranged garden flowers.  Despite the fact that the voice of Doris Day was actually emanating from my iPod, which is perched on the piano in the corner, it could have been 1952.

Who was the obliquely named “Ernald”, and what did he look like?  We didn’t have long to wait to find out. The guzzling and scoffing of scores of decorous villagers and a few dratted, cake purloining “William Brown” style boys (who seemed to belong to no-one) was to be interrupted by a ceremonial unveiling.

Behind that swiftly mounted blue velvet curtain lay the portrait of Ernald Lane in ecclesiastical garb, purchased “by subscription” by Kings Bromley villagers and organisations from what was explained to us was the “internet auction site”, eBay ;).  This work of art was once in the collection of the actor Derek Nimmo, who obviously enjoyed, as I do, fond memories of his trademark portrayals of naive clergymen who inhabited  situation comedies back in the black-and-white days.

The ancient Lane family moved from Bentley, near Walsall to Kings Bromley Hall many, many years ago.  Co-incidentally, my mother, now a resident of the village, has made the same journey.  She was born in 1929, the year that the old Lane family home, Bentley Hall was demolished.  Her childhood was spent living a few hundred yards away in a – then – new council house with her parents and her four siblings.  The M6 hadn’t been dreamed of, and Bentley “Moor” was where your dad went to catch rabbits to augment a meagre depression-era diet.

Back in the 60’s, visiting my mother’s mother, my gentle Granny Sheldon – as she watched the wrestling on Saturday afternoon TV – I was bemused by the road-sign “Lane Avenue”, on the thoroughfare abutting Friezland Road.   It made no sense to me at the time, and,as I read it, “Avenue Road…Street Crescent….” et cetera, used to roll through my mind.  Much later, I became aware of the Lane family, and the tale of Lady Jane Lane’s assistance to King Charles II after the Battle of Worcester in 1651, as he escaped to Bristol disguised as her servant.  Despite the building of the motorway, and the general unloveliness of the area, Bentley now has a whiff of romance about it for me!

Ernald Lane was born in Kings Bromley Hall in 1836, made a fine career for himself in the church, and was obviously held in some esteem by the denizens of his birthplace.  Kings Bromley Hall was also demolished in the 1920s, and the family is virtually extinct.  Nevertheless, to prove their reverence for the village’s heritage, the Historians tracked down a Mr Lane with a suitably patrician demeanour and a proven genetic relationship to Ernald, should their family trees be drawn back to the 18th century. Mr Lane unveiled the portrait, said a gracious, well enunciated few words, and presented some family documents to the village, which was kind.  He and his wife didn’t touch their cream teas, though. 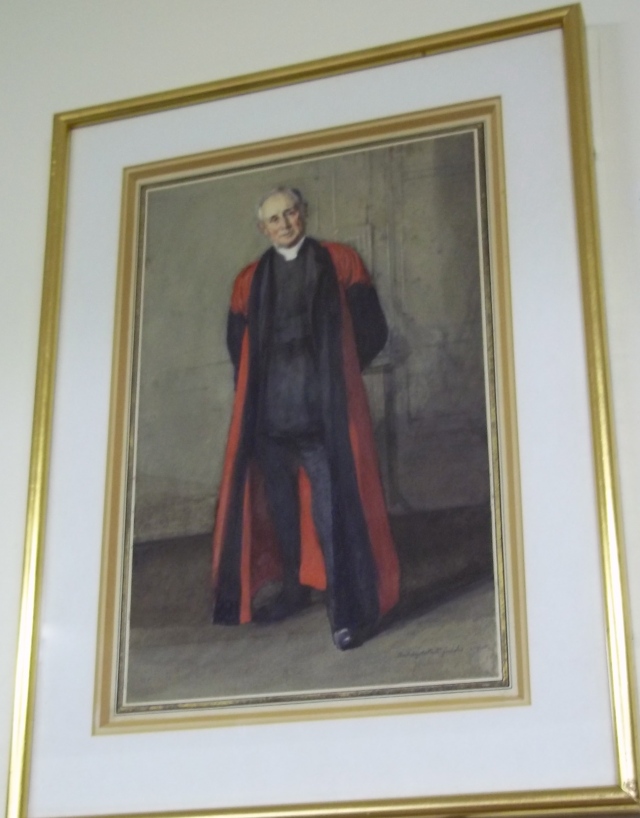 5 Responses to A multi-Lane byway.