Out of the woods

Posted on April 11, 2015 by staffordshirebred 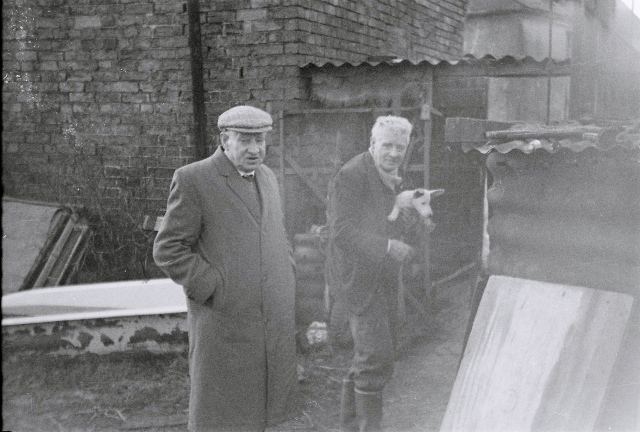 The last time I went to Fishpond Cottage was in about 1968, soon after my dad’s Uncle Jack had died. Whoever now owned it, or, for all I know, had owned it all along, wanted it completely refurbished, and had engaged my dad to do the job.  No one was living in the old place, so, as was often the case, I happily tagged along with him.  We turned off from the busy Chester Road, away from the modern world, through that most secret gap in the trees, and bounced along on what seemed to me a long, curving lane between the woods and the quarry in our van.   I can just about still bring to mind an impression of a large, gloomy living room with a beamed, low ceiling. In it was a black varnished piano, whose keys I was allowed to bang tunelessly on. It must once have been Uncle Jack’s or Aunt Gertrude’s.  She had been gone a few years.  I remembered overhearing the story of how, after her very last breath, when Uncle Jack opened the window of her room at Fishponds to release her soul, he literally saw a milky vapour rise from the bed and leave. So whichever spirit haunted the place, it wasn’t her.

There wasn’t much that my skilful dad couldn’t do for an old building like Fishpond Cottage. He could lovingly re-point the old brickwork that had sheltered members of our Horton family during the past 7 decades.  He could re-plaster walls as smooth as glass, and chamfer just the right bit of wood to make good the loss from rot on an old lintel. Electricals he left alone.  His sparky was a great big chap from Lazy Hill Road. This man normally had a very puffed-up demeanour, but my dad received a breathless phone call from him late one night after he had been working alone at Fishponds, and without giving much detail, he said that under no circumstances was he ever, ever, going back there. 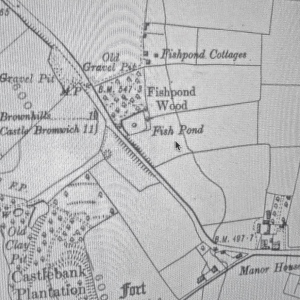 Fishponds Cottages, in the early 20th century. Via oldmapsonline.org

The Fishpond Cottages, at some point, became a single dwelling: –  A rangy, white rendered affair that has changed hands in the last couple of years for a sum that would make my great uncle’s and my granddad’s mouths drop open in astonishment.

Back in the 1900s, there were four distinct households at Fishponds, living in what seem to have been three humble four-roomed cottages.  From at least 1901, one of these housed Gertrude and her numerous brothers and sisters  – a family headed by her father John Horton, related to me via two or three branches of my family tree.

By 1911, my great grandfather Thomas Horton also lived in another one of the cottages, with his wife Elizabeth, and their two youngest children –  that is, their sons (Alfred) Noah – who would become my grandad, and John (Uncle Jack).

On the night of the census, April 2nd, 1911,  Gertrude was not registered at her own home. Instead she was hob-nobbing next door with her second-cousins. My family seldom troubled themselves to seek far or wide for a suitable spouse.  Noah married his cousin Mary Elizabeth Blann in 1912, and brought her home to Fishponds where their first child, my Aunt Mary, was born the following year.  Then Jack married Gertrude,  in the spring of 1914. Crowded out of the tiny house, or with my grandmother characteristically possessive over space and attention, my grandparents shifted the little distances to Shire Oak Hill, and thence to The Vigo, and finally back to the company of trees in Keeper’s Cottage, under Footherly Woods. I do imagine an unbearable bickering in the scullery amongst the sisters-in-law, and the mother-in-law (who was also aunt, and cousin) before they left, about which my grandmother might have borne a bitter grudge, because my Aunt Mary later remembered how the joys of a forbidden visit to her relatives at the Fishponds had, later, to be savoured very secretly…

When we were very young, Bill, me, one in the push chair used to go for a walk, taken by Dad. It must have been on Sunday mornings. The highlight of the walk was sitting on Uncle Jack’s and Aunt Gertrude’s squab, eating bread and butter spread with marrow and ginger jam. When we started home Dad used to take Cousin Georgina [Jack and Gertrude’s only child] with us as far as the road, then sent her back. Then he would spit on his hanky and wipe round our mouths so there would be no sign of food and say ” Now, if you tell your Mam , she won’t let you go again. Now… what ain’t you got to tell Mam ?”

Fishponds was a strange place to live, when you think about it: Isolated, unconnected to the nearby settlements of Stonnall or Walsall Wood, which were, even so, so near; hemmed in by trees and the adjacent excavations. I don’t see the cottages mentioned by name earlier than the turn of the 20th century. Could they have been constructed for workers at the quarry?  If so, how come my grandfather and his family ( then coal miners), and his cousin, Gertrude’s father, John ( a bricklayer) lived in them? And what of the Fish Pond itself? Clearly marked on maps contemporary with my family’s occupation, just how old was it, and why was it significant enough to give its name to the wood, and the cottages?  Was it, as it appears to me, man made? What was its connection with the Iron Age Hillfort of “Castle Hill,” looming on the other side of the Chester Road?

By the 1960s, only Uncle Jack and Aunt Gertrude remained at Fishponds, and our association with it ended soon afterwards, when the required work on the cottage was completed. Their parents were long dead, of course, and I don’t know when Gertrude’s remaining siblings had drifted away. Records show that her pigeon fancying brother Bert seems still to have been knocking about at Fishponds according to an account of a hearing at the Brownhills Petty Sessions in August 1934: A fauna-based fracas involving a rabbit, a pigeon and a duck resulted in a telling off from Mr Cooper, the prosecutor, and payment of costs, with the pugnacious Horton brothers and their associate John Seedhouse bound over to keep the peace.

3 Responses to Out of the woods