Posted on January 3, 2013 by staffordshirebred

The Guardians’ Building is the only remnant of the Walsall Union workhouse, whose infirmary evolved into the adjacent Walsall Manor Hospital.  In its early Victorian, Italianate splendour, it is something to admire, whilst waiting on the car park for festive visiting hours to begin on Ward 9 – perhaps, noting the leafy growth from the roof, while I still may.

Respecting the season,  car parking charges have been waived during the 25th and 26th of December, which I find an incongruous gesture. Mother seems quite gleeful, as if this were a Christmas gift, or that we were getting away with something we oughtn’t to. Despite the iron grey skies, and our anxious sympathy for the patient we have come to spend time with, these visits are definitely not the darker interludes of the 2012 holidays. There is sporadic cheerful chatter between the two of us and it is my delight to be free of a hostess’s teeth-gritting obligation to make meaningless small talk with people you are forbidden from disliking. My mother’s youngest sister, although confined to bed, tetchy and in pain, has got some colour back in her cheeks, and we are optimistic about her chances of recovery.  The car park is large and level, and although we are looking through leafless trees onto industrial premises, their careful planting amongst grass and shrubbery gives the impression that the environment around the building has been considered important.  I do hope the suitably empowered realise the uplifting potential of preserving the Guardians’ Building.

We have been in and out of here too frequently in the last few years, and remember the mud and pot-holes we used to struggle to park up in: an extra flake of irritation in 2007 –  tiny, beside the gigantic gouge of loss we were experiencing.

The new Manor Hospital. Does the architecture of the new hospital make a faint nod towards the style of the Guardian’s Building?

Now, the redeveloped hospital is bright and impressive, with lofty halls, light-filled corridors and a reassuring emphasis on cleanliness. We used to associate our local nursing heroine, Sister Dora, with the old General Hospital, but now she is commemorated here at “The Manor.” There is a prominent board bearing information about her life and significant contribution to nursing, and a plaster cast model of her strong, noble features, identical to the bronze statue by FJ Williamson on The Bridge, which has been familiar to me for the whole of my life.

“The Spirit of Sister Dora”

Just inside the entrance, The “Spirit of Sister Dora” is a 2010 work by Steve Yeates, which, very appealingly, has been created from glass from the windows in the old infirmary.  There is something very fitting and moving about the sculptor metaphorically capturing the troubled stares of the sick paupers of long ago through those old panes, from their sick beds to the busy world outside, and incorporating them into this lovely work of art.

As the wintery minutes ticked on until two o’clock, me and Mom gazed, in companionable silence, across Pleck Road, through the rain beaded windscreen of the silver Ford Fiesta, my late dad’s final car, which I inherited, I calculated, five and three-quarter years ago, the day he didn’t come back out of The Manor Hospital. Ghosts tend to rise at Christmas. 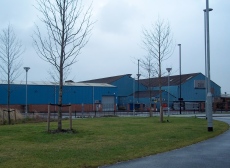 The site where my great-aunt Louisa’s house stood in the first half of the 20th century.

“My Aunt Lou used to live over there, just where that blue building ends,” my mother said, unexpectedly.  My mother’s memories stretch back to 1930’s Walsall, but supposing that my great-aunt, Cecilia Louisa Ruddell, nee Sheldon, had moved to the little house in Pleck Road early in her marriage to Uncle Ted? 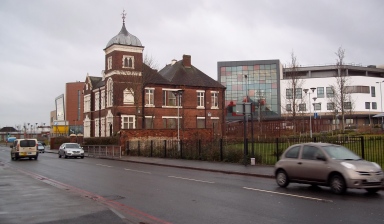 View of the Guardians’ Building from the site of Louisa’s house. The Union workhouse buildings stood where grass and trees have been planted.

It would have been business as usual in the Union workhouse in those days, and how must it have felt to peep round the lace curtain in the tiny parlour to see a downcast queue shuffling in the cold immediately opposite, outside the Receiving Ward? Was it a sight so commonplace that it did not merit notice?  Did my great-aunt, with her industrious husband, and manageably sized family of three, view the inmates as feckless and lacking in pride?  Or did she clutch little John, Eileen, and Kathleen to her skirts, and remember with a shudder that she had been told that her own great grandparents had ended their days in the a Union workhouse?

The Sheldon family in the 18th and 19th centuries populated the area in and around Ocker Bank, the very heart of the Black Country.  My great grandfather and his Irish wife migrated slowly eastwards, first to Wednesbury, where my grandfather and his sister, great-aunt Lou, were born in the 1890’s, and by 1911 they were living at 196, Queen Street, Walsall.  This is a house my mother remembers well.  Steps up to the front door, parlour, living room and scullery.  Mom’s grandmother, born Maria Egan, spoke with a strong Irish brogue.  Her white hair was piled up on her head in a bun, and over her long black dress she wore a sparkling white pinafore.  She would stride from the back door, past the outside lavatory and shed, over a small thoroughfare to the garden, where she kept her chickens. Her fierce devotion  to the faith she was brought up in reverberates down the years.  There was no question that her son Edward, my grandfather, would have all his five children brought up as Romans Catholics.  His youngest daughter, my currently hospitalised aunty,  remained both unmarried and devout.  She has had a long career of unpaid service in the church, and “Fathers,” and “Sisters” may both be encountered at her bedside at visiting time.

A little way down the road from the Sheldons in 1911, census returns reveal 185, Queen Street to be the home of the Ruddell family, including great-aunt Louisa’s future husband.  His occupation, like that of my grandfather at the time, is described as “Caster’s helper.” Was the man Louisa married her brother’s foundry workmate, as well as her neighbour? Meanwhile, 18 year old Louisa works as a “Jappaner of Harness Furniture”, a typical Walsall occupation in the “Town of 100 Trades.”

My grandparents’ first child was born in the family home in Queen Street, but by the time my mother came along they had moved out into rooms in Countess Street.  In Deepmore Avenue, Bentley, their address lost its aristocratic connotations, but a spacious, new, council house was theirs, where three more children arrived.

At the bottom of Queen Street is the small cemetery, now overgrown, where Dorothy Pattison, “Sister Dora”, was laid to rest in some grandeur following her death on Christmas Eve 1878. 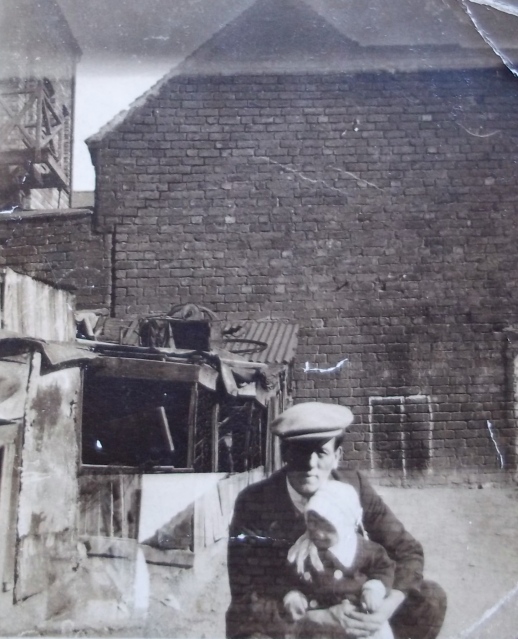 My maternal grandfather, Edward Sheldon, in about 1927, with his first child, Winifred. At the rear of the house in Queen Street, Walsall

7 Responses to Queen, Countess, and Paupers.