When we were very young

Posted on November 11, 2012 by staffordshirebred

It was “Decorarte” in Hatherton Street, Walsall for bespoke paint and wallpaper, Shenstone Brickworks for bricks, and Mr Hilditch’s shop in our High Street in Aldridge for the odd dozen nails or screws. It was Magnet Joinery in Lichfield for timber. But some time in the very early 70’s, “The Big ‘K'” became a convenient one-stop shop for many of my Dad’s building materials. That builders’ merchant, with an eye to the burgeoning DIY market, was our nearest approximation, then, to an out-of-town superstore. It had been erected on a spacious site, reclaimed from industrial activity – adjacent of what my forbears had disparagingly called the “Dry Bread” pit because of its meagre wages, and the pit’s associated brickworks.  It had an unused Sunday morning car-park round which I, like many others, I suspect, made their first staccato circuits learning to drive a car.

“The Big ‘K'” was in an area known as “The Vigo”. Somewhere near the perilous meeting of five roads at “Street’s Corner” had stood the house in which my father had been born, and where he had just about started school, before the family upped and moved back to Footherly, to Keepers Cottage, the use of a couple of acres, clean air, and quiet. But whereabouts could it have been? In response to my enquiries, my Dad would wave his hand vaguely in the direction of a building incongruously called “Swiss Cottage”, which didn’t look to me like it had been there since 1925. His scant memories of the time were a novel mixture : A bear in the street; an Airship looming overhead, and a vividly recalled conversation on the way to school one sharp frosty morning, accompanied by a slightly posher boy. Beset by a chesty winter cold, little Ted had complained “I ay arf gorra cuff”. To which the child replied, jabbing with his finger at my father’s small, and, no doubt, threadbare wrist: “That, my fellow, is your cuff. You have a cough.”

King’s Hayes Farm, helpfully still standing, where Uncle Bill, my Dad’s oldest brother would be sent with a pitcher to fetch milk, was only “over the road” which gave me another half useful clue. “No milk today, Mam.” Bill had said one morning, according to family legend, as he returned to the kitchen empty handed. “The cuh’s ‘ad two little ‘osses!”

The alarming wild animal, the huge flying cigar, and the Horton family jokes are, thankfully, not all I have to go on: In her 10th decade, my Dad’s eldest sister obliged by writing some records of this era long ago, including where they lived. She was born at Fishponds Cottages,  in 1913, but the first house she had memories of was on Shire Oak Hill, and that was firmly stuck in the mind because of the following traumatic incident.  It took place, she thinks, she was about four years old:

… I had been sent up to the Sandhills. To get there, I had to walk about a quarter of a mile, cross the crossroads at the Shire Oak pub, and go down the Lichfield Road about 200 yards then turn into the track down to the sand hole where Dad was working. Dad gave me an envelope with his wages in, and took me back to the road. I hadn’t gone far when a huge dog bit my arm, and I screamed “Blue Murder!”. Dad appeared, and carried me home

Thence to “The Vigo”….Where the 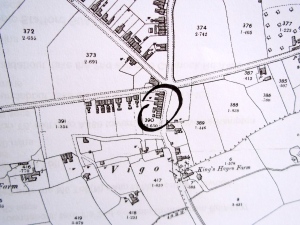 ……roads met.  All had terraced houses…….The Vigo…the road down to Walsall Wood…our road led to Aldridge….joined Salters Road which could take you to Brownhills.  Directly opposite the pub was a real country road called “The Castles” which led to Stonnall.

The next house we lived in was about number six, Aldridge Road, later…..we moved into number one.

So, there I have it. The modern pairs of houses at the top of what was “Aldridge Road” but has since been rechristened “Northgate” don’t start quite from Vigo Road as did their predecessors, which are clearly marked  on my reprint of the 1901 Ordnance Survey Map. By my calculation, where my father was born, on August 31st 1925, is now a little patch of mown grass, at the corner of these now busy thoroughfares. Would you like me to lead you up those roads when children could play at energetic bouts of  “Kick can I erky”  in the gutter, their game seldom interrupted by motor vehicles? We can even look through the little windows, and name some of the neighbours going about their business, or involving themselves in some dramatic happenstances. Let us then make a date, and soon, to leaf through some more of Aunt Mary’s notebooks.

9 Responses to When we were very young