Posted on November 3, 2012 by staffordshirebred

In the farmyard at The Owletts, Aunty Mary shows recalcitrant “Billy” who’s boss. A murderess is no match for her!!

As the Second World War broke out, changes were afoot in the little hamlet of Lynn in Staffordshire.

In 1937, my dad’s eldest sister, Mary Horton, had become Mrs. Alfred Cooper, and married life had begun in the “Lodge” on Lynn Lane, at the end of the drive leading to the Coopers’ farm, The Owletts. Aunt Mary relates, amongst the memoirs she wrote late in life:

The last week in August 1939 was quite strange. Father-in-law had moved out of the farmhouse and rented the next farm, leaving Owletts Farm house empty.

During the hours of darkness there was much rumbling of vehicles going up and down the long tree-lined lane to the farm. We knew something strange was happening to do with all the rumours of war, which were on everyone’s lips.

” Oooh ar!” said the postman, who only had one arm having lost the other in the last war. ” You can’t fool an old soldier, we’m gooin’ for him, an’ it won’t be long.”

A searchlight site was installed in the big field, the generator that powered it situated in the orchard beside the farmyard. When the camp was in order, the soldiers vacated the farmhouse, and Aunt Mary and Uncle Alfred took up residence.

The war in Europe really got going, and men committed acts of violence against their enemies.

But loping along the hedgerow, here comes a violent woman, and she is heading straight for the farmhouse, where Uncle Alfred is already in bed (he will be making an early start on the milking in the morning) and Aunt Mary is completing the long day’s chores in the kitchen…….

A woman knocked on the kitchen door about 9 o’clock and asked if she could wash her feet, her shoes were in her hand, her feet bare. I said ” Yes, but I have no hot water” She answered by asking: ” Could I sit near your fire?”

How very odd that request was, the grate was empty.

She began to wash her feet. I stood looking at her. The sergeant from the camp walked in: ” A friend of yours?”

The sergeant went out ” I’ll be back shortly.”

Meanwhile, the young woman carried on washing her feet. When she spoke, she asked: ” Aren’t you afraid, letting a stranger into your house?”

I laughed: ” Not unless you are a thief or a murderer!”

She burst out crying, ” I have murdered my husband ”

At this point Sergeant returned with a corporal. I told him what she had said. He looked at the woman: ” You’ve done WHAT missus?”

” I have murdered my husband. ” Her voice was now calm. She was no longer crying. Corporal was sent back to camp to phone the police.

My husband, the sergeant, and our local policeman, who was also “Sarge”, stood between the large farmhouse sink and the large table. On the side near the empty firegrate sat the young woman. I stood at the narrow end near the door. Husband asked why I had got him out of bed, but soon forgot bed!

Soon Corporal returned with a message for his sergeant: He was to go to the phone. There was a small procession out of the house into the yard: Sergeant, Corporal, my husband, and Sarge P.C. Sarge P.C turned at the door and told me to lock it: ” An’ Missis… don’t let her have the key.”

I locked the door, plunged the key down my bra then turned to the woman who had stood up, saying, ” Please let me go.”

” No. You heard what Sergeant Spraggett said.” She began to walk round the table towards me. I suddenly realised the position I was in – locked in a room with a murderess – only my kitchen table between us.

I moved round the table away from her, determined to keep it between us, knowing that she could try to take it from me. We might fight for that key. I might come off worst! Her request turned to demand. I tried not to show my fear.

She shouted, ” GIVE IT TO ME! ” I thought, ” God, she is going to have a go at getting it. Relief came at that moment. A man’s voice: ” Open the door Missis, it’s me Spraggett.” Never did a man’s voice sound so sweet! He said: ” I have to take her to the station for the night, they will pick her up in the morning.”

We watched him take her across the yard to where his bike stood against the stable door. He held her with one hand and pushed his bike with the other as they slowly faded into the dark. It was just a mile to Shenstone village and the police station. Not a light to be seen anywhere. There had been a full moon for a few nights so there had been no sirens wailing and the searchlights stayed at rest. The moon would be up in about an hour, we expected another quiet night. The sergeant and corporal went back to the camp, we returned to the house. We were drinking a cup of tea when Sarge Spraggett returned..

” Her’s Gone! Loosed her hand for a second and she was across into that field across the road like a bloody hare! I biked round the back road, but her’d gone.”

Sarge Spraggett had a cup of tea, then he went and we were able to go to bed… though my recent ordeal kept returning to my head.

Next morning we got the news the woman had been found near Burntwood, which was 8 miles away, in a very distressed condition. Later in the day her family said her husband had not been murdered, he was seriously ill in hospital.

Sargeant Spraggett! You couldn’t make up a more perfect, Blytonesque name for a country bobby, could you? Or could you? The 1911 census reveals a nest of Spraggetts at Chorley Road, Boney Hay, of which our Sergeant might well have been a scion. I asked Cousin Ros whether Seargeant Spraggett was really the police officer’s name…”Oh, no”, she said…..”Dad always called him “Bloody Spraggett!” 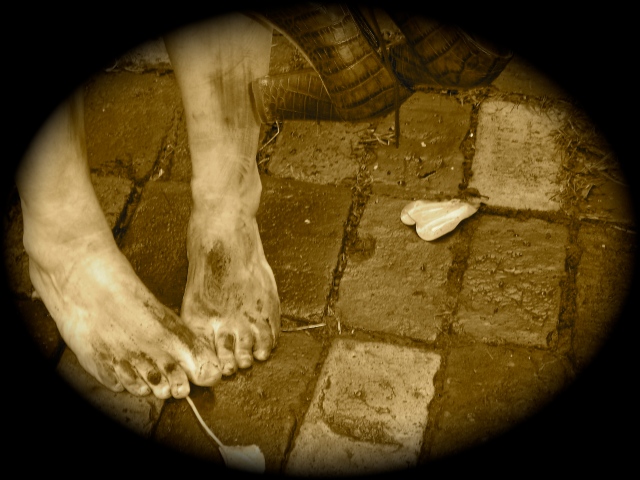